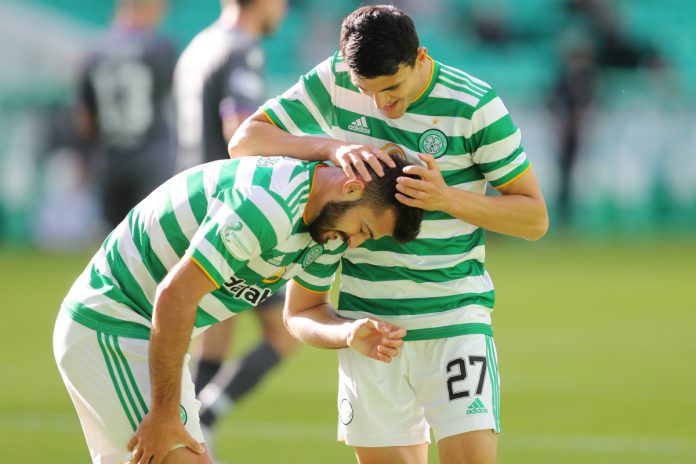 Celtic star Albion Ajati could face Rangers next month after suffering a hamstring injury against Hibbs.

The Swiss hitman, who scored his fifth league goal for the club, was from the start of the Premiership clash, but only minutes of the game. Minutes later Odson was replaced by Edward.

The potential spell for the summer 5 million summer signing would be a big blow for 23-year-old Lennon as he begins to find his footing at the club.

Speaking about Ajati, Lane told Celtic TV: “I think he looks like a hamstring for an Albion so it could be a few weeks for him.”

On Ryan Christie, he added: “It was windy and he had a little pain in his stomach.

“We’ll have to wait and see. I think it’ll be fine for Thursday.”

Celtic took the lead just seven minutes later when the ball was called to the bottom of the left-hand corner.

Mohamed Illinoisi scored Celtic’s third and the first league goal of the campaign to secure all three points for the hosts.

Leigh Griffiths was back on the bench with the Scotland international named, but an early unbeaten loss will be worrisome for Lennon with big games on the horizon.

Celtic are on the road on Thursday night when they face Sarajevo in the Europa League play-offs.

Hoops is only 90 minutes away from returning to the group stage of the competition.

The Scottish champions reached the knockout stage last season and enjoyed some memorable results along the way – including a home and away win over Italian giants Lazio.

St. Johnstone then provides the opposition three days later as Lennon and Co travel to McDiarmid Park the following Sunday before the international break.

Celtic will then host Old Firm and title rivals Rangers at Parkhead on October 17 as the two sides go together for the first time this season.

According to reports, Burnley will bid for Ryan Christie before the end of the transfer window.

The Hoops Stars have established themselves as the club’s best players and key names on the team sheet in recent seasons.

Stay up to date with all the latest news and transfers on the Scottish Sun Football .l page