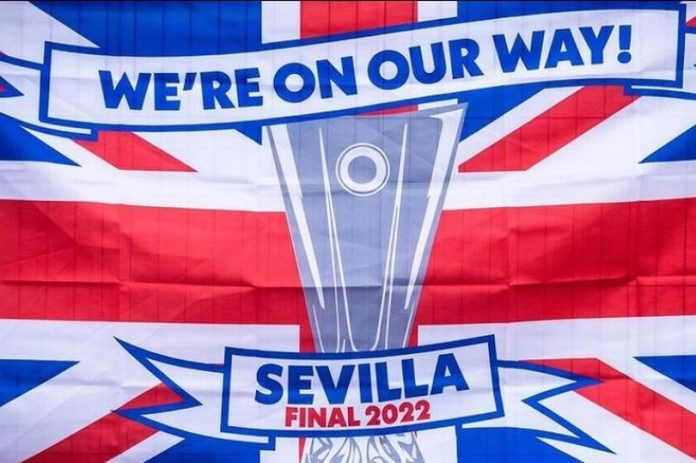 For the first time in more than a decade, Scottish football will be represented in a major European final, as Rangers aim to claim the UEFA Europa League title. German side Eintracht Frankfurt will stand in their way, although the Glaswegian club will be backed by massive travelling support in Seville.

The official capacity at the Ramon Sanchez-Pizjuan venue will be 40,000 for the final, with each of the competing clubs having received 10,000 allocations apiece, while a further 13,000 tickets were also put on general sale to the public. Despite those limitations, thousands of Rangers fans travelling without tickets will still be heading to Spain, according to Sky Sports.

Fortunately, Spanish police and local authorities in Seville have agreed to host supporters travelling to the city, whether they have tickets for the game or not. Although UEFA had previously urged ticketless fans not to travel, many still wished to travel and enjoy the atmosphere surrounding the Europa League final.

Back in 2008 and estimated 200,000 Rangers fans travelled to Manchester, when the club played Russian side Zenit St Petersburg in the UEFA Cup final. Mindful of this, UEFA adopted a change in their stance for the 2022 Europa League final, aware that preventing so many Scottish fans from travelling to Seville would be practically impossible.

Instead, arrangements have been made to welcome ticketless Rangers fans. After a series of consultations with UEFA and Spanish authorities, due to limited options to watch the game in bars around the city centre of Seville, the organisation of a fan viewing area has been confirmed by the Scottish club. This will be located at Estadio La Cartuja, where the Spanish Copa del Rey final was recently played.

Estadio La Cartuja has the capacity to host up to 60,000 fans, with a giant screen available to provide live and uninterrupted viewing of the Europa League final. Tickets to view the game at this venue are priced at €10 and have been made available online. Likewise, a meeting point adjacent to the stadium has been established, fully serviced with pre-match entertainment, plus food and drink stalls.

The facilities around Estadio La Cartuja will be open from 11am on Wednesday 18th May, the day of the final, until 8pm when eager supporters will be able to head into the venue itself. “Go and enjoy the city but let’s go and do it in the right way,” said Stewart Robertson, the managing director of Rangers. “Respect the city, respect the locals,” he urged, hopeful that every travelling fan will be a “good ambassador” for Rangers and Scottish football.

All eyes on the big final

Due to all the complexities of organising overseas travel and security for thousands of supporters, Rangers were unable to open their Ibrox Stadium home to fans for the final, amidst hopes the club might have made a giant screen available. Nevertheless, the game against Eintracht Frankfurt will be free to view on BT Sport in Scotland, without the need for a subscription.

Many fans will undoubtedly be looking to back Rangers for success, making this a timely occasion to find the top betting sites in the UK, which can be aided via the latest SBO guide. This covers everything you need to know about the best online wagering options available, featuring ratings and reviews for the safest and most trusted betting sites in the business.

Rangers will head into the Europa League final as slight underdogs, according to the majority of bookies, although they will certainly be aiming to upset the odds against Eintracht Frankfurt. Given their progress in the competition, having beaten such strong opposition along the way, nobody should underestimate the chances of Rangers winning the competition. As their club motto suggests, the team and their fans are more than “Ready” for success.