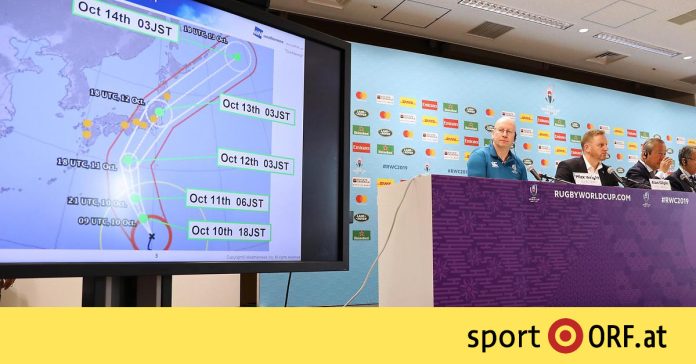 England-Yokohama in France and Toyota in New Zealand-Italy games are affected. As provided in the rules, both games will be scored as 0:0, with each team receiving two points. Sunday’s game between hosts Japan and Scotland is also staggering.

Never in the tournament’s 32-year history have a World Cup game been cancelled. Friday’s game between Australia and Georgia in Shizuoka remains on schedule, as is Saturday’s game between Ireland and Samoa in Fukuoka.

While England and France had already secured their places in the quarter-finals before the cancellation, the Italians have lost a small chance of promotion. With a victory against the “All Blacks” they could overtake the world champions. “I found it really difficult and I saw the reaction of the players after training. It was terrifying,” said Italian coach Conor O’Shea. “These guys have dedicated their lives to Italian rugby and their world. The cup will end at the training ground instead of the pitch.”

The cancellation is particularly bitter for Sergio Paris. The 34-year-old captain is one of just three players to feature in five World Cups and was aiming to end his international career with a match against New Zealand. Paris has made 143 national appearances, with only Richie McCaw managing more for the All Blacks.

Japan (14 points) and Scotland (10) are still fighting for promotion to Group A. A decision about a possible cancellation should not be made until Sunday.

However, Scotland, which prevented Japan from reaching the quarter-finals for the first time four years ago, is gearing up for a decider. A statement said they were looking forward to “contingency plans to allow Scotland to compete on the pitch for a place in the quarter-finals”.

The “complex and dynamic” situation

World Cup director Alan Gilpin spoke of the “complex and dynamic” situation in a statement on Thursday. You closely follow the course of thunderstorms together with your own meteorologists. Hence, both the games were canceled due to security reasons.

Typhoon #15 Faxei caused $443 million worth of damage and 3 deaths earlier this year. Typhoon #19 is two and a half times the size of Hagibis. This is quite unprecedented for this time of year. #safety first pic.twitter.com/UpQ2epAhAJ

It would be irresponsible, Gilpin continued to expose teams, fans and support personnel after the expected storm. It said the storm would cause significant damage to public transport in Tokyo, Yokohama and Toyota on Saturday.

According to the Japanese National Weather Agency, the storm will hit the Kanto region over the weekend, which also includes Tokyo and Yokohama. It is likely to cover the area with strong gusts of wind and rain and may cause flooding.