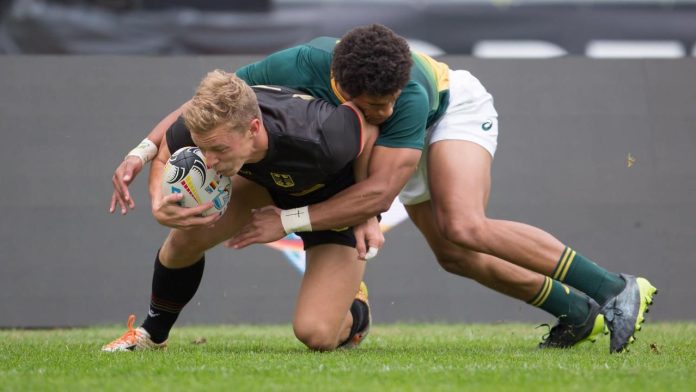 For the first time, a German 7-a-side rugby national team competes in the World Cup. Only qualifying is victory. Players and coaches want to hold their own against South Africa’s top nations.

The best rugby teams in the world meet in Cape Town from 9 to 11 September – Germany among them. In the first game, Chile is still a viable task for the Germans. If the first knockout round is completed, the hosts and top favorite South Africa will be rivals. National coach Clemens von Grumbko expects “full attention” from his team and would like to finish in the top 16 at least.

The German national team has already achieved the historic feat with qualification in July. Never before has the German senior team played in a 7-a-side Rugby World Cup. A dream setting with 60,000 rugby fans awaits players at Cape Town Stadium in September.

The German 7-a-side rugby national team manages to qualify for the World Cup in Bucharesto.

Playwright Fabian Hempel, 32, has a clear goal for his 50th tournament: “We have to show that it’s not a matter of luck for the Germans. We want to sell ourselves well and show that we are better.” One of the European teams,” he says in an interview with SWR Sport.

More focus on the game of rugby

Playmaker Bastian van der Bosch still cannot believe what he and his teammates have achieved in qualifying for the World Cup. The 31-year-old tried to qualify for the big event ten years ago. At that time, players trained only four times a week and had no coach. A lot has happened since then. The commercialization of training conditions marks its first successes.

The atmosphere in the German rugby stronghold Heidelberg, nicknamed “Wolfpack”, the team’s preparation for the World Cup: “Everyone is happy, you can tell in every training session that the anticipation is growing.” Van der Bosch also wants to win the first game against Chile next Friday, everything after that is a “bonus”, he tells SWR Sport. But there is one thing he wants most: “I expect Rugby 7 to become more and more popular in the years to come.”