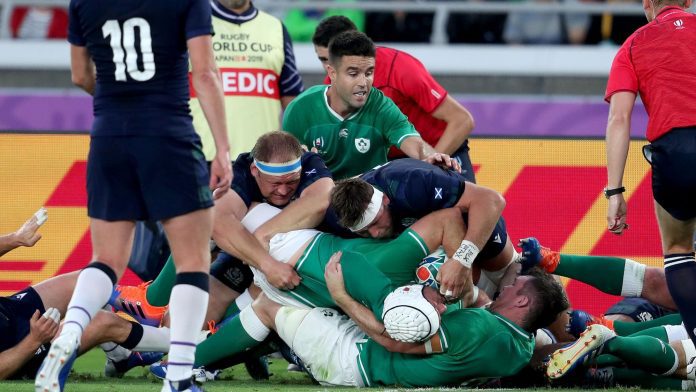 Big game on Day 3 of Rugby World Cup: Ireland beat Scotland 27-3. “The Irish have shown that they really deserve the top spot in the world rankings,” explains SébastienTrepp. “They had Scotland from the start, and Lord knows they are not a bad rugby team, in control in every way. The Irish team defended very aggressively, had a variable and strong attack and made few technical errors. This is important in rugby: in the end, it’s always about good field position, because you want to be in the end zone – in-goal. And if there’s a technical error, you always lose possession of the ball. And this field position as well. The Scots have sealed their own defeat several times in crucial situations.”

So far, many teams have had an unusual number of problems with ball handling as the air in Japan is extremely humid and therefore slippery. It appears that some teams have treated the balls with soapy water or oil in preparatory training. But the problem still persists. At the Olympic Games next year, if it is also hot, the humidity could affect other sports.

Favorites always win in the World Cup. Japan also won the opening game against Russia. However, the hosts have no chance of winning the title. Favorites come from Europe and the Southern Hemisphere. Balance of Power: In 2003, England were the only European team to win the title. The remaining seven titles are distributed in the Southern Hemisphere. The possibilities are vast this year. “But New Zealand are still top favorites for bookmakers. The All Blacks are simply the ultimate in rugby. They won the last two tournaments as well,” says Mr Trapper.

Overall, the World Cup in Japan has clearly been well received and is not only a test run for next year’s Olympic Games, but a major tournament in its own right. “And because you really need a week to recover after a rugby game, the tournament also lasts six weeks. In terms of compactness, it can’t really be compared to the Olympics.”