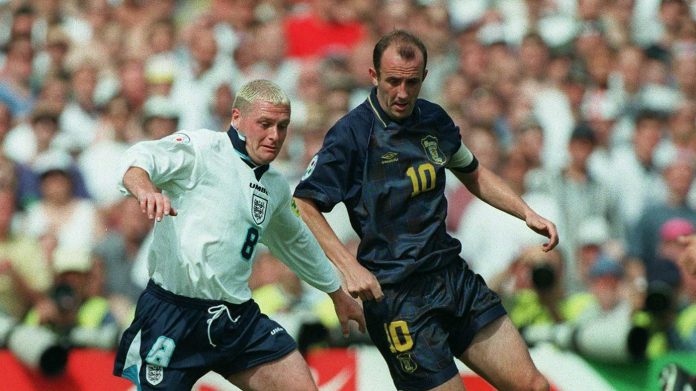 Tension is also rising in the Berlin district of Wedding. Fraser McCabe has been taking reservations for Friday nights for several days. The Berliner is originally from Dundee by choice, but has been running the Scottish gastropub “Hirsch und Hase” on Voltastraße for many years. Many Scots in Berlin will be watching from afar on Friday when their team takes on their hated and beloved rivals England in their second Group D game (live at 9 pm, ZDF and Magenta TV).

“We’re already fully booked and are expecting over 100 guests, which is plenty for us,” says McCabe, whose phone has been ringing almost non-stop for the past few days. While the majority of reservations are made by Scots, England fans are also welcome. “After all, British money is as good as other people’s,” laughs the innkeeper, who has converted a 200-litre oil drum into a grill to serve culinary delights alongside game. There should be an atmosphere of celebration. After all, it’s not every day that Scotland play England in a major tournament.

Even in England, when the Scots invade London, people hope for a more peaceful and friendly environment. Of the 22,500 spectators at Wembley Stadium, there will officially be only a few thousand fans coming from the north, but in reality there are likely to be many more – particularly outside the stadium. It was only on Wednesday that reports of fans making the long trip to London were appearing in the Scottish media. Clad in kilts and Balmoral caps, the jubilant ‘Tartan Army’ boarded the train in Glasgow for the ceremonial march on the old enemy from the south.

Around 20,000 Scottish fans were expected to arrive in England’s capital this week, despite official warnings against such travel. In the UK, the seven-day event is now under 80 new infections per 100,000 people, and the extension of coronavirus restrictions for another month prompted some disappointment this week. On Wednesday, London Mayor Sadiq Khan expressed concern that the EM game could lead to a sharp increase in infections in the capital. “In an ideal world, I would welcome the Tartan Army to London with open arms, but with numbers rising, that won’t be the case this time around. The best thing to do would be not to come to London and instead enjoy the game at home.”

This is probably a pious wish. Because when England play Scotland there is always something special for both fan camps: Delta Vs or not. The oldest rivalry in football was first played in 1870 at “The Oval”, a cricket stadium. A total of 114 encounters have taken place since then, some of which have become formative cultural experiences in the nation’s history. The famous European Championship group match at Wembley Stadium in 1996 is considered by some to be the climax of a fairytale English football summer, with effects that went far beyond football. Football had ushered in the Britpop era when Paul Gascoigne beat Scotland with a dream goal and made the whole country laugh with his dentist cheers. A few months later Tony Blair quoted the popular EM song ‘Three Lions’ in his speech at the Labor Party conference. “Labour is coming home,” said the man, who a year later became the first Labor prime minister in two decades.

The Scots want a new referendum

A quarter of a century later, England and Scotland meet again in a Euro group match at Wembley, but this time against a very different political backdrop. The buoyant optimism of that time has long since evaporated, and relations between England and Scotland have also been greatly affected by the turmoil of the previous ten years. In 2014, Scotland voted narrowly against independence. Today the Scottish Government is fighting passionately for a second referendum.

Both football camps have recently tried to downplay the importance of the rivalry a bit. “My children and grandchildren are English,” said Scotland manager Steve Clarke in an interview with the Guardian before the tournament. He enjoys the derby, but at the same time he tries to hide the “noise”. England’s Raheem Sterling also warned against “fighting old battles” this week. Of course there is history, said the Manchester City attacker, “but for me it’s just a normal game”.

Nevertheless, there will be a special atmosphere on Friday evening, as duels have become a rarity on the pitch. Since the British Home Championship was abolished in the mid-1980s, the two rivals have played each other less and less. They have met just six times since Euro 1996, with Scotland’s last two victories in 1981 and 1999, so Friday’s game is also a historic occasion for the visitors.

“A game against England is also a chance to show what we’re capable of. There’s a lot more respect for us now as we go into a tournament,” Scotland captain Andy Robertson told UK broadcaster Sky Sports this week. The Liverpool full-back also believes his team can find something in London. “England are one of the favorites for the title, But if our plan works, we can do it.”

For the Scots, the prestige duel is ultimately also an all-or-nothing game with survival in Group D at stake. Following a disappointing 2-0 defeat to the Czech Republic, Steve Clarke’s side need at least a point to keep their chances of progress alive, but they will once again be relying on one of their best players, the Dane. Can Arsenal defender Kieran Tierney. On the other hand, the British are in a good mood and without any pressure. Gareth Southgate’s side can already dream of reaching the last 16 after beating Croatia 1-0. With the return of defender Harry Maguire, the hosts are gaining experience and defensive stability.

See also  Thanks for the results of the competition: German Volleyball Players World Cup 16 . shiver in the round
Delta variant spreading fast Johnson postpones easing for four weeks

If the underdog can’t surprise Fraser McCabe, it’s not a disaster. “At the end of the day it’s just a football game,” agrees the wedding host, who actually prefers to watch rugby than football. Nevertheless, he is looking forward to an opportunity to celebrate another win against England. Because the Scottish national team has only beaten the old foe once before this year at Twickenham Stadium, the home of English rugby. “If we even beat them at Wembley, we can brag about it,” said Scott.