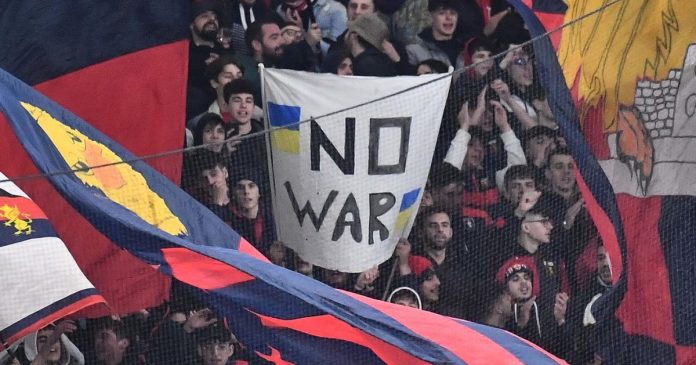 After Russian troops invaded Ukraine, a number of measures were taken against Russian and Belarusian athletes and officials.

Several events this year in Russia and Belarus have also been canceled or postponed. An overview.

IOC: The International Olympic Committee has recommended that world federations and event organizers no longer allow athletes and officials from Russia and Belarus to participate in international competitions – unless under a neutral flag and without an anthem.

Football: FIFA and UEFA have suspended Russian teams from all competitions. Among other things, Russia is not allowed to participate in the World Cup barrage to be held in March. Spartak Moscow has been excluded from the Europa League. UEFA is moving the Champions League final from St Petersburg to Paris on 28 May. Switzerland, Poland, Sweden, Czech Republic, Denmark, Norway, England, USA, Scotland, Northern Ireland and Ireland do not currently want to play against Russia. Clubs such as Manchester United (Aeroflot) or Schalke 04 (Gazprom) and UEFA (Gazprom) ended sponsorships or partnerships with Russian companies.

Ice Hockey: The Council of the World Federation IIHF has excluded Russia and Belarus from all competitions until further notice. All Russian and Belarusian teams of all ages are affected. A World Cup in Finland will take place without Russia and Belarus. At the end of the year the U20 World Cup, which was supposed to take place in Novosibirsk, will be withdrawn from Russia. Top Finnish club Jokerit Helsinki will not participate in the playoffs of the Eastern European Elite League (KHL). Latvian club Dinamo Riga is also withdrawing from the KHL. The NHL broke trade ties with Russia. EV Zug suspends sponsorship relationship with Nord Stream.

Formula 1: Formula 1 is canceling the Russian Grand Prix in Sochi on 25 September.

Ski/Snowboard: The FIS excludes teams from Russia and Belarus from all competition for the rest of the World Cup season. The exclusion applies to all FIS divisions and competition series. The FIS had previously canceled all World Cup events scheduled for this winter in Russia. So they competed in ski cross in Sunny Valley near Chelyabinsk, in Yaroslavl and Ariel in Moscow, in women’s ski jumping in Nizhny Tagil and Tchaikovsky, and in cross-country skiing in Tyumen. Norway has banned teams from Russia and Belarus from participating in their World Cup, which are still due until the end of the season. Swiss-Ski supports the sanctions of both the IOC and the FIS.

Tennis: The ATP has canceled the tournament in Moscow due in early March. At the ITF level, all tournaments in Russia and Belarus in 2022 have been cancelled.

Judo: The world federation is canceling the end-May World Cup in Kazan, Russia. Vladimir Putin has been suspended as the Honorary President of the World Union.

Sport climbing: The international federation withdrew Russia from hosting the first match of the Bouldering and Speed ​​World Cup in Moscow in early April.

Basketball: Russian teams are excluded from the Euroleague and Eurocup.

Handball: The European Union transfers all upcoming home games to clubs or national teams from Russia and Ukraine, games to be played on neutral ground. The two matches between Greece and Belarus in qualification for the Women’s European Championships at the end of the year will be postponed indefinitely.

Swimming: According to the world federation FINA, athletes from Russia and Belarus are only allowed to compete in international competitions under a neutral flag and without an anthem. FINA is canceling the Junior World Championships to be held in Kazan at the end of August.

Gymnastics: The World Federation cancels all planned World Cups and World Challenge Cups in Russia and Belarus and will not host any new events for the two countries in the near future.

Tobogganing: The Natural Track Luge World Cup final to be held in Moscow has been cancelled.

Equestrian sport: The World Equestrian Federation (FEI) has suspended all international events in Russia and Belarus.

Chess: The Chess Olympiad will not take place in Moscow from July 26 to August 8. All international competitions in Russia and Belarus have been cancelled. The world federation FIDE has terminated its contracts with Russian companies.