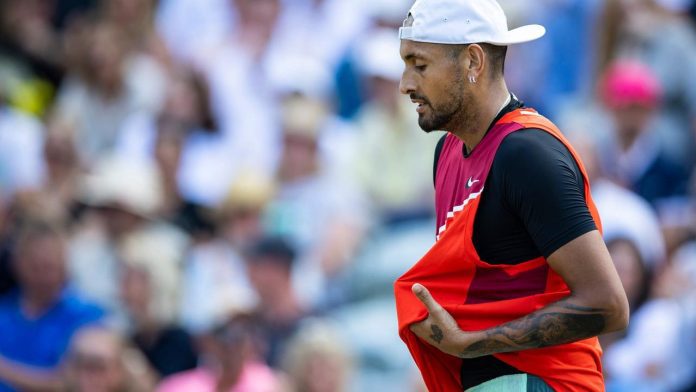 Australian tennis pro Nick Kyrgios condemned racist statements from spectators after the semi-final at the ATP tournament in Stuttgart.

“The one thing I will never tolerate is swearing and swearing at athletes. This has been happening to me personally for a while now, from racist comments to outright disrespect,” the 27-year-old wrote on Instagram. “I pushed it aside for years, but especially in Indian Wells and today in Stuttgart, I see people think it’s normal.”

Kyrgios, also known for his freaks, lost 6-7 (5-7) and 2-6 to two-time Wimbledon winner Andy Murray on Saturday., His behavior isn’t always the best, but comments like “you little black sheep” and “shut up and play” are not acceptable, he wrote in his Instagram story.

Kyrgios takes on the audience

After a balanced first set, the tie-break ended ugly. In the last rally, Kyrgios bounced the ball due to a mistake and the Australian broke his racquet. For this he was punished with a point deduction. At the start of the second round, Kyrgios also flirted with the spectators, insulting them and was cut to make it 0:2.

After that, the match was about to be canceled as the Australian did not want to get used to the game, talking to himself and moaning. He played the game non-stop till the end and the audience bid him goodbye. “If I fight back against the mob, I will be punished. This is stupid,” he wrote.

Tournament organizers pledged their support to Kyrgios on Sunday. “The incident is currently being investigated by those responsible,” it said. Values ​​such as “fairness, tolerance and team spirit” have “top priority for the event”.

Murray vs Berrettini in the final

Murray complained about the circumstances of his final shortly after the end of the game. “In the end it was no longer fun,” he said on ServusTV: “In the second set it was no longer a real match.” Played in former world number one Then in the final against Italian Matteo Berrettini and in 4:6, 7:5 and 3:6. lost to, Berrettini defeated Oscar Otte of Cologne 7:6 (9:7), 7:6 (7:5) in the semi-finals.