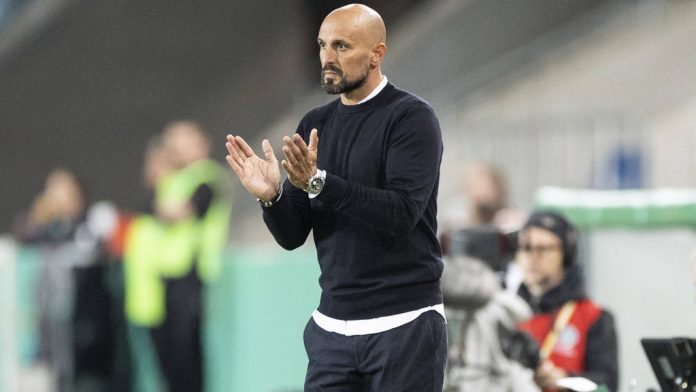 Before the endurance test in Sheffield, German U21s had a moving trip to the site. In front of Hillsborough Stadium, the team around coach Antonio Di Salvo laid flowers at the memorial for the 1989 stadium disaster and commemorated the 97 dead. A touching moment and not the daily prelude to a short but intense business trip to England.

Because the game in the homeland of football will be a real highlight on Tuesday (8.45pm / ProSieben Maxx) just 24 hours after the duel between the two senior national teams at Wembley. “A lot of intensity, a good pitch, a few more spectators – and hopefully luck is on our side,” expected offensive player Jan Thielmann from 1 FC Köln for the match at Bramall Lane, home of second division leaders Sheffield United.

Nine months ahead of the European Championship, Di Salvo is hoping for key insights for the defending champions, as he did in a 1-0 loss against France in Wiesbaden on Friday. England is absolutely right: “We want these tests to see where we stand,” says the DFB coach. It will be a team that is just as well equipped as the French, who plays at home and the game they play wants to win. ,

Attacking player Reda Khadra, who has been with Sheffield United since the summer, has a real home game – two weeks ago he scored the acclaimed winner at Swansea City deep in injury time. The 21-year-old said, “The game will be something special for me. This is our stadium. I hope there will be a lot of spectators. It will be a great game against England and I hope we can win there.”

“The best thing is to compete internationally at the highest level”

The game against two-time U21 European champions England, who easily qualified for the 2023 European Championship with eight wins in ten matches, has always been a highlight for German U21s. In 2009 (finals) and 2017 (semifinals), the road to the title progressed through older rivals. The decisive defeat occurred in the first leg of the final on September 21, 1982 – in Sheffield, at Bramall Lane.

Almost 40 years later, a German U21 is back in the traditional stadium. In terms of the game, there is very little at stake, but it doesn’t matter.

“The best thing to do is to compare yourself at the international level at the highest level,” said Cologne’s Thielmann after the loss against France on DFB-TV. The DFB team can prove it on Tuesday.