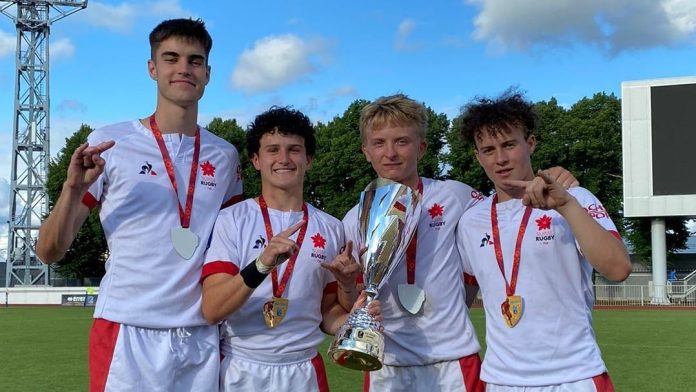 Zug rugby player Paul Halter (17) talks about winning the European Championship and his career goals with the U18 selection.

The Swiss U18 selection surprisingly won the B European Championship in Riga at the end of July. Rugby sevens were played, a version in which only seven players are on the field at a time. Switzerland celebrated the final victory against Turkey and now next year’s A-EM will play against the twelve best nations in Europe. Paul Halter was one of four Zug players on the team. In an interview, he talks about his success and his career goals.

Did the Swiss team expect such success?

Paul Holder: We gave everything and always believed in him, but no one expected victory. We only had one training session before the European Championships. So we didn’t know how well the team plays together. But we already knew that we have good players with us.

How strong is the team, does the team have a chance against top countries like France or Ireland?

It would be difficult to win against France or Ireland. Unlike Switzerland, they have their own rugby sevens league. Everything is much more professional there. The goal is to stay in the upper group next year. We will try our best to be there as soon as possible.

How did you get into the game of rugby, why not football?

I used to play soccer. I once went to New Zealand with my family for three months. After two years I quit football and wanted to do another sport. Because I loved New Zealand so much, I chose rugby, although the nearest club, Zug, is an hour and a half drive away. I knew I wanted to do something physical so rugby was the perfect fit.

What do you have in mind later in your career, do you want to become a professional rugby player?

It is hardly possible to make a living from rugby in Switzerland. So I want to complete my kranti and find a good job.

Are you considering moving abroad if your career continues to be successful?

I haven’t thought much about it, it’s just too far. But it’s definitely an option I’m considering.

What is your goal with the national team?

The team’s ultimate goal is to qualify for the subsequent Olympia Sevens tournament. Then you could definitely make money from rugby.