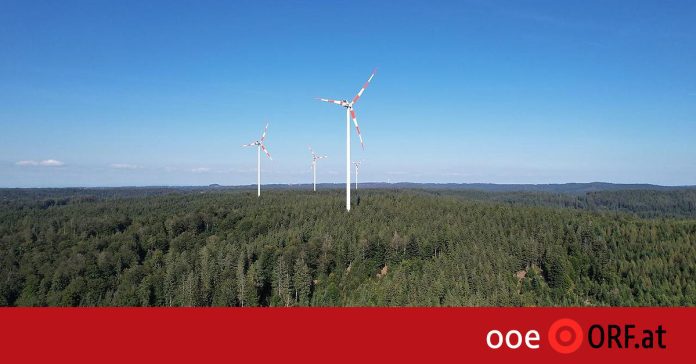 The “cradle of wind power” – as IG Windcraft lawyer Ursula Nahr Oberösterreich calls it, since the first wheels in Austria began turning in 1996 with “Adam” and “Eva” in Inviertel – is now slacking off this option. energy production. When it went into effect in 2017, not a single new bike was approved, and Upper Austria has kept 30 features unchanged since then.

The dependence on Russian gas makes it clear that now one must “quickly think about the available resources” in one’s own country. “The energy transition is life insurance,” said IG Windcraft Managing Director Stefan Moidel.

With 200 new wind turbines – one costing around six million euros – three terawatt hours of electricity per year could be generated. “Now it’s just a matter of using the wind,” warned President Joachim Perr. To do so, however, state politics would have to move the lever, turning the master plan “from a means of containment to a mobilization pool”, according to Nahar. Overall, it does not indicate any suitability zone.

One reason is the Nature Conservation Law, which is based on the old image of “cheese vine nature conservation”. The lawyer criticized that it was mainly about protecting the landscape and less about climate-friendly energy as a contribution to nature conservation.

The usual 1,000-metre distance rule for a settlement is “excessive”, as individual checks are done during approval anyway. According to Payr, it is essential that approval processes be expedited; At present, it takes five to seven years for a plant to be approved. Windcraft AG now hopes that the country will reconsider the energy crisis and wind power will be operated simultaneously, according to the chairman.

As expected, the support comes from the Greens. Wind power is “an essential piece of the puzzle in the overall picture, and without it it will not work,” Environment Minister Stephen Kneider said in a broadcast. Black and blue in Upper Austria should listen to experts, overcome “wind power avoidance” and set the political course for the offensive. He pointed out again that only two percent of the potential wind power capacity of 2,300 MW is being used in Upper Austria. His party wants at least 100 new plants in the country by 2030.

VP: Expansion of existing facilities only

From the point of view of OVP, there will be no new space for wind turbines. A broadcast said the plants would only be built where wind farms already exist. Wind power is “a significant addition to the energy mix”, but construction must be “in harmony with nature”. Wind power is not a “cure-all”, explained club president Christian Dorfel. He assured on top. With the FP the government program will become climate neutral by 2040.

Economic provincial councilor Markus Eckleitner (OVP) noted Upper Austria’s renewable share of 84 percent in production and emphasized that each federal state should find the best energy mix for its location. By expanding and “reviving” existing plants, you can produce completely different quantities, three to four times as much as currently. And Upper Austria has “a third less wind” than a flat country like Burgenland. Werner Steinker, general director of Energy-AG, explained that the problem with wind and PV is the narrow time window for overproduction and how the energy can be stored.