far ahead of its time

Just as PlayStation and Xbox today split the player community into two camps, it was the Amiga and Atari ST that caused heated discussions in the late ’80s. “Frundin”, as the Amiga was affectionately called by its fans, should emerge as the clear winner from the race, as it clearly had impressive sales figures. When the Amiga 500 appeared in 1987, the world was suddenly different for sports fans…

The A500 Mini looks like this packaged up. Quite action packed.

One glance at the monitor was enough to get you hooked. The opulence of optics, animations and 4,096 colors that can be displayed in titles like It Came from the Desert, Dungeon Master, Apidea, Lotus Esprit Turbo Challenge or Defender of the Crown easily outweigh everything you’d expect from a computer game used to. On the other hand, a PC with EGA optics didn’t stand a chance! At the time, almost every gamer was happy to distribute a few more newsletters than the Amiga would be able to afford at some point. With a memory upgrade from 512KB to 1MB and an additional drive, they were at the forefront of the latest and best games for a few years. A huge hacker scene by today’s standards, which garnered its own attention with insanely cute introductions when playing every “backup copy”, ensured a constant supply of new titles without worrying too much about monetary outlay. This went well until the VGA standard prevailed on PCs, with Wing Commander and Strike Commander flickering on the screen and no desire to grope ten floppy disks from Monkey Island 2 on the Amiga.

Retro has a heart for retronauts 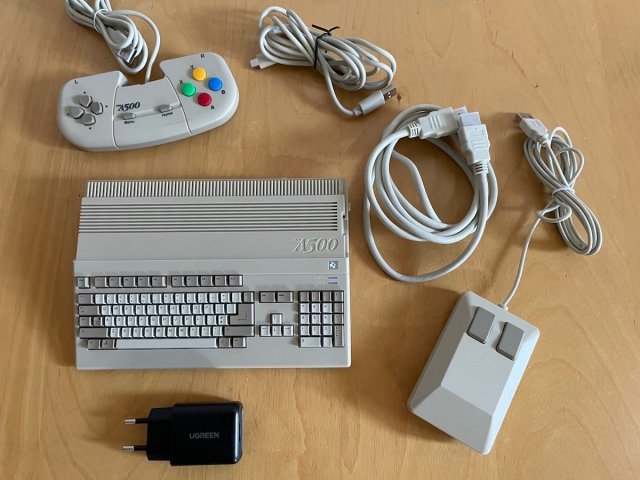 And that’s it: The scope of delivery includes replica, gamepad, mouse, HDMI cable, and USB-C cable. The user will have to find the connector himself.

Manufacturer Retro Games is now bringing back those wonderful times: After the C64 Mini, the A500 Mini is a dwarf version of the successful Commodore computer, which includes 25 pre-installed games. Of course, you don’t have to bother with the red, white, and yellow plugs, picture and sound are output via an HDMI connection. There are three USB ports on the back, and there’s also a power connection via a USB-C cable, the corresponding adapter for power supply not included in the delivery scope. The first, real downer is the manufacturer’s decision to use the gamepad’s cheap-looking plagiarism from the outrageous Amiga CD32 for the input device. The better-crafted Competition Pro in transparent blue color with silver keys would have been more reliable and certainly the better choice. The smaller replica case, on the other hand, is of fairly good quality, but the mini keys can’t be stifled; The smoker’s yellow, which after a few weeks settled on the white-grey housing in the Amiga 500’s smoke-filled burrows, has already been planted here at the factory. good lie! In addition to the gamepad, there’s a mouse that comes almost as close to the original, but certainly no longer has an embedded ball on the bottom. 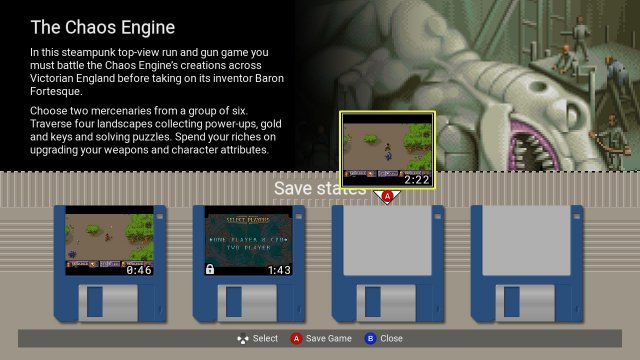 All games offer an easy save feature. Many Amiga owners would certainly have wished for that time.

The little toy box is set up a certain way, it takes less than a quarter of an hour to start up—but the tension builds up almost unfathomably before you turn it on for the first time. Although there are hardly any real highlights from the 25 pre-installed games, one is still very excited to see how much attention the ravages of time have paid to the brilliant optics of the time. Before we get started, there are still some settings to be made in the A500 Mini’s clearly laid out menus: Should games be displayed at 50 or 60 Hz? Image output as full screen, with black stripes or iconic scan lines as a nostalgic extra? Decides the taste of the buyer. For testing we opted for full format connected to an 82-inch screen, then the next drawback comes into play: for a seat distance of about 2.5 meters, the gamepad’s cables (1.80 meters) and mouse are too short, so for the SNES Mini The cable extension used will have to be used. At that time, no one would have dared to dream of such a setup, an “Amiga” on a huge screen.