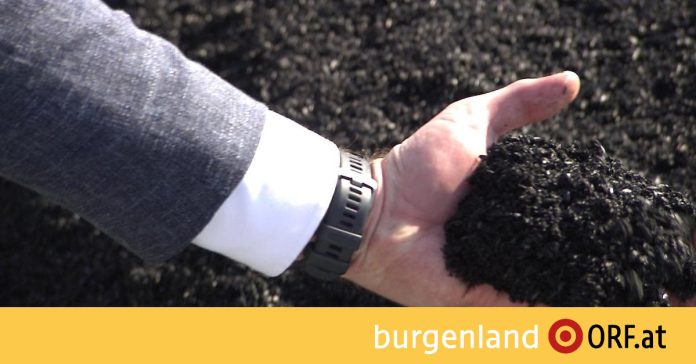 Concrete is considered harmful to the climate because a lot of CO₂ is released into the air during its production. Technologies are being researched around the world to make concrete as climate-neutral as possible. The company Sonnenerde in Riedlingsdorf believes they have found a solution with biochar.

Biochar binds to CO₂ and prevents it from entering the atmosphere and polluting the climate. At the Sonnerde Composting Plant in Riedlingsdorf, biogenic waste such as tree and shrub cuttings is converted into high-quality soil. However, biochar is also produced, but so far only in small quantities. This should change. Sonnerde is investing 7.3 million euros in the construction of a production hall in which to produce biochar on a large scale in the future.

The biomass residue is heated to 600 degrees in the absence of air. The result is a product reminiscent of charcoal. It is used, for example, as an additive to animal feed or to produce particularly high-yielding black soil. Biochar can also be added to concrete, explained Sonnerde’s owner, Gerald Dunst. This not only results in a stable carbon bond and thus ideally CO₂-neutral concrete, but also brings many advantages to the concrete, such as increased tensile strength and compressive strength. Thermal insulation and fire safety are also improved by adding biochar to concrete, according to Dunst.

New hall made of eco-friendly concrete

To show that it works, Sonnerde uses eco-friendly concrete in the construction of the production hall. The company is collaborating with a large concrete producer who is also interested in improving the environmental balance of concrete. The example should set a precedent and find imitators around the world, expects Sonnerde’s managing director Dominic Dunst. Biochar is one of the very few CO₂ binding techniques that has only advantages: “The more widespread it is, the more CO₂ we can all bind together, capture, and thus save the world.”

The new hall for the production of biochar should be ready for operation in July next year.