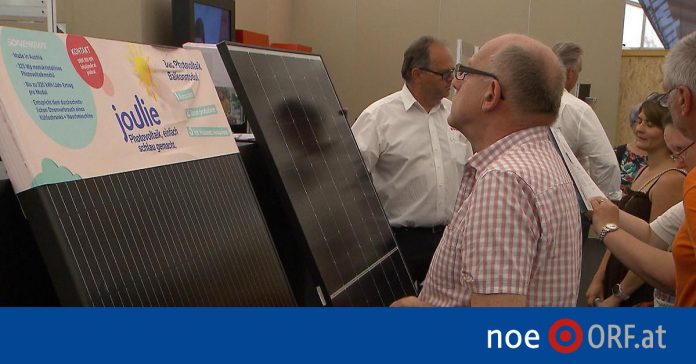 Electromobility, construction and renewal, health and wellness and biodiversity – the areas from which the approximately 180 exhibitors in the 35th Biome in Groschnau (Gmund District) come are very diverse. Above all, a theme at the fair is more topical than ever because of the steep increase in prices: renewable energy.

Many seek advice from experts on how to switch to climate-friendly energy sources. Sabine Weinschitz of Straß im Straßertale (Krems District) explored Thursday about an air heat pump as an alternative to gas heating. “The whole thing is certainly very interesting given these high energy prices. We are currently dependent on electricity and gas.”

At the trade fair, Claudia Oberdorfer-Hertzie of Echsenbach (Zwettl district) also explored what options there are for a more sustainable living. “We have built a house with a photovoltaic system. We are now considering whether we should expand it further and add an electricity storage system.”

Photovoltaic power storage as a precaution against blackouts

Andreas Kern, who sells photovoltaic systems and power storage, also recommends such power storage systems. As a result, according to the expert, the excess electricity generated on the roof of the house can be stored instead of putting it entirely into the public grid. “Of course, this is one of the most attractive things at the moment, as power storage systems are also suitable for isolated operation. This means that photovoltaics will also operate without the grid if a blackout occurs, for example. At this time We’re always talking about this,” Kern says.

Even if you can save a lot of money with renewable energy and do something good for nature on top of that, there is currently a catch, as Roland Weisinger, who sells heat pumps, knows. Huh. “The demand is so high that we as installers and electricians cannot do it all. This means that if someone decides to use a heat pump now, they won’t be able to use it until the winter of 2023,” Weisinger explains.

No money for “warmongers” for sustainable energy

That is the motto at Groschnau, at least not only as part of the biome – away from fossil fuels and towards sustainable energy. At Waldviertel they are leaders in renewable energy, emphasized Deputy Governor Stephan Pernkopf (ÖVP) at the opening of the fair on Corpus Christi Day: “The average exchange rate at ‘Ross aus l’ is one or two percent. Here you achieved 30 percent.” Is.”

And the goals of the region are still ambitious, explains Martin Brueckner, mayor of Groschnau and president of the union that organizes the fair. “We want to be ten years faster than other regions when it comes to phasing out fossil heat sources. Then we will have an additional 1.7 billion euros in Waldviertel and we can withdraw money from authoritarian regimes and warlords. Will take,” says Brueckner.

See also  Its developers and how it works