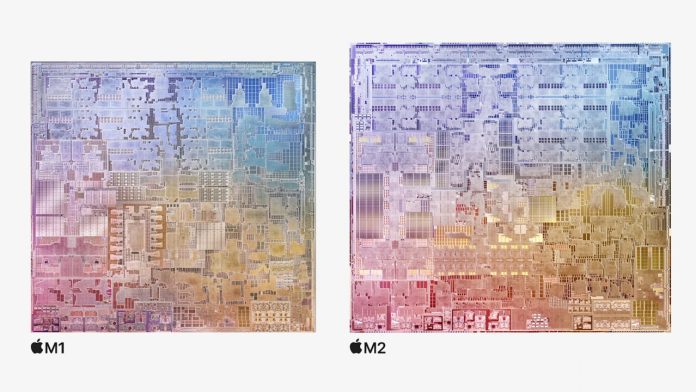 According to media reports, Apple plans to use more US-made chips from 2024 onwards. But it’s not that simple, even though contract manufacturer TSMC has been mentioned as a potential supplier. Apple gets the most important chips from them anyway, but the schedule and TSMC’s US plants are more problematic here.

In 2024, Apple’s flagship products will be two generations ahead, and the second level will move forward accordingly. The core of Apple’s iPhones with the A16 SoC already uses N4 production, which currently marks TSMC’s spearhead. Expected to switch to N3E in the coming year, the A17 is said to be the first solution for this improved 3nm process. And Mac won’t stand still, they’re currently using the N5 and N5P production stages as the M1 and M2, with the M3 to N3E leap being here too – by late 2023.

A tie-up with TSMC seems logical, given that Apple is looking to source chips from increased US production from 2024. But of all things, TSMC’s new factory (Fab 21) is only for limited use: it’s apparently intended for the N5 manufacturing process and a small production volume of 20,000 wafers per month. Apple will hardly need it from the end of 2024, at least for the SoC of the most important products. However, TSMC also makes other chips, so the statement that Apple is looking to source chips for its products from Arizona by 2024 is not incorrect.

However, with Apple on the gas pedal, TSMC could be pushed to expand the Fab 21 in the US more quickly. A few days ago there was a rumor that a second stage for the N3 process would be built at the same location. There it was already said that the land of Fab 21 is already designed for the construction of the second phase of the factory, which will make the overall project significantly more cost-effective, which ultimately also concerns TSMC, which previously always Taiwan has faced higher costs than the United States warned about.

Obviously reducing dependence on Asia is at the top of Apple’s agenda. But chip production is only one building block for the whole product. Recently, Apple has had to re-learn how much reliance on a large manufacturer like Foxconn also causes problems.

Incidentally, Apple also mentioned Europe at the meeting, from which more chips are to be sourced in the future. Here too, the first steps may be of a more symbolic nature and mature later. As Apple began bringing production back to the US with the Mac Pro. Today it’s being built end-to-end in Texas, but it’s a smaller niche product, also equipped with older hardware.