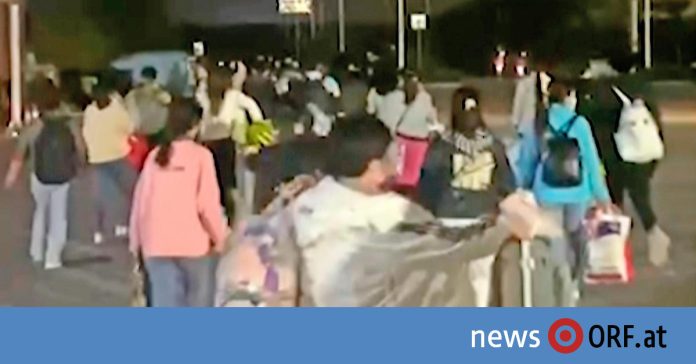 Several videos of workers fleeing the company’s factory premises in the eastern Chinese metropolis of Zhengzhou circulated on social networks over the weekend. You can see how people sometimes climb over fences and run away with suitcases and luggage into the fields and roam the streets at night.

The authenticity of the recording has not yet been verified in all cases. But the Zhengzhou municipal government later circulated a statement that Taiwanese company Foxconn had promised to improve living and working conditions for any employees who chose to stay. According to the administration of the capital of the central province of Henan, orderly transportation should be provided for others.

Foxconn employees run away from lockdown

In China, employees of Apple supplier Foxconn fled after the coronavirus lockdown. The factory in Zhengzhou is one of the most important production sites for iPhones. The employees were reportedly no longer allowed to leave the premises, but should continue to work.

The plant in Zhengzhou, which employs several million people in normal times, is one of the most important production sites for Apple’s iPhones. There were reports of extremely bad conditions in some parts of the city in the last few days since the imposition of strict COVID measures. For example, employees should no longer be allowed to leave the premises – but continue to work nonetheless. The workers also complained about the problem of food and drink.

As Reuters news agency reported on Monday, production at the plant could drop by as much as 30 percent in the coming month due to stringent CoV restrictions. Reuters cited an insider who wished to remain anonymous. The source said Foxconn is working to ramp up production at another plant in Shenzhen.

264 cases in Zhengzhou since mid-October

Foxconn has not yet publicly announced whether coV infection has been detected among workers at the Zhengzhou site. Authorities have reported 264 locally transmitted COV cases in Zhengzhou since 19 October.

Under China’s extremely strict zero-Covid policy, communities must act quickly to contain outbreaks, with full-scale lockdown measures. Factories in affected areas are often allowed to remain open on the condition that they operate in a “closed loop” where workers live and work there.

Recently, local restrictions and lockdowns have been tightened, including in parts of large cities, due to the increasing number of cases in several outbreaks across China. Disneyland in Shanghai abruptly ceased operations on Monday. According to the Shanghai Municipal Government, all visitors are allowed to leave the site only if the result of the COV test conducted at the site is negative. Anyone arriving at a theme park from Thursday must test negative for the coronavirus for three consecutive days.

Visitors were also asked to avoid “group activities”. Disneyland Shanghai previously announced that the park would be “temporarily closed with immediate effect in accordance with disease control requirements.” “We will inform the guests as soon as we have a definite date for resumption of operations,” he added. Videos circulating on the Chinese short message service Weibo show people running towards the gates of the park, which were already closed.

This is partly due to slowing global demand, but also due to tighter domestic COVID-19 restrictions that are affecting manufacturing, travel and shipping in the world’s second-largest economy. “With a zero-Covid policy, we believe the economy will continue to struggle in 2023,” Jichun Huang, economist at Capital Economics, said in a research paper.