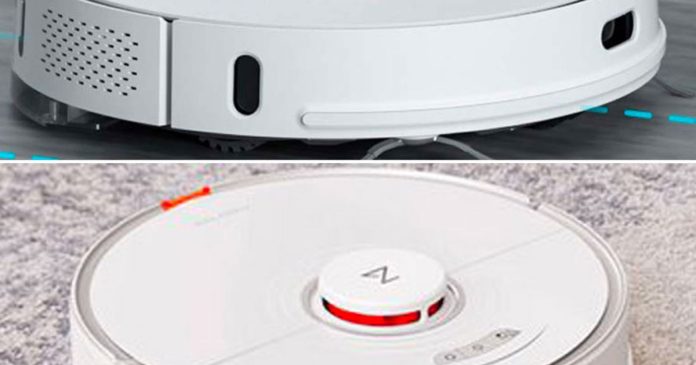 At first glance, it is difficult to differentiate the Roidmi Eve Plus from the Roborock S7+. These two robots are round, one covered with white plastic and one covered by red/orange plastic hanging upside down by a laser rangefinder.

This increase adds a few centimeters to them compared to models equipped with sensors or cameras; They are more likely to get stuck under very little furniture.

On their cover, there are three physical buttons that can start or stop cleaning, return the vacuum cleaner to its base, and start local cleaning. All other options are available on the app.

Automatic emptying is a fundamental trend that is gradually becoming more democratic and is well understood by Roidmi and Roborock. They both provide a charging station, the purpose of which is to suck up the dust that has accumulated in the vacuum cleaner collector. This system frees the user from this routine work and also limits the risk of dust spreading.

If the Roidmi emptying station is more sophisticated, it comes equipped with a tiny display that indicates the robot’s battery level. Roborock stands out from the competition with its double emptying system, with or without the bag as desired! The bag capacity of the Roidmi (3 litres) is significantly more generous than that of the Roborock (1.7 litres). On the other hand, automatic bagless emptying doesn’t force the user to buy a bag back for its suction base, which can convince more than one.

Another similarity between the two devices: They have a small water tank and a base to accommodate a wipe. It is specifically used for cleaning hard floors. The Roborock washing system is more efficient than its rival, as it works by sonic vibrations that finely brush the floor to remove stains. *In contrast*, the Roidmi Eve Plus wipe allows the robot to superficially wash the floor. – so without brushing – and cannot make a complete cleaning solution.

Configuring the robot in a home WiFi network does not cause any problems. All the steps have been carefully detailed. Both applications offer very similar functions: remote activation of a cleaning cycle, weekly programming, choice of suction power and humidification level, history of cleaning sessions, etc.

The two devices can map in real time and provide a very accurate map at the end of their route. From these detailed plans, one can easily create plans, rooms, and install virtual beacons to prevent the robot from reaching certain rooms or areas of the room.