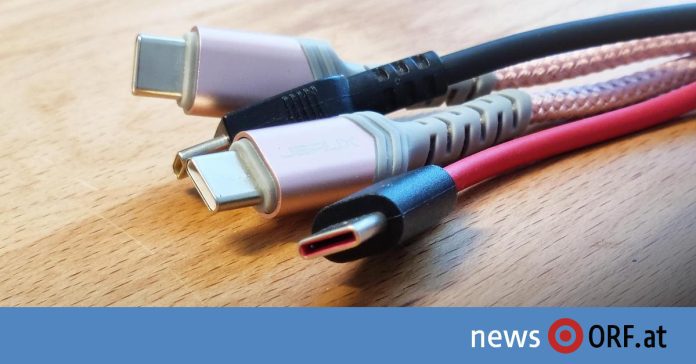 In addition, Parliament was able to obtain through negotiations, for example, laptops, e-readers, keyboards and computer mice, navigation devices, smart watches and electronic toys, as long as the devices were large enough for the respective There are connections – although laptops have a long transition period to deliver. In the future, it will also be possible to purchase the device and charger as well as the charging cable separately.

EU states, on the other hand, have achieved in negotiations that the new law will come into force only from mid-2024. Parliament wanted the rules to be implemented first. Both EU countries and the European Parliament have yet to formally ratify the agreement. But it is considered a formality.

The road to agreement was long: chargers for all electronic devices were announced in early 2009. At the time, however, only 14 manufacturers — including Apple — made commitments that only partially took effect. As a result, the number of different connector types went from several dozen to three at present: the now outdated Micro-USB, the newer USB-C, and the thinner Lightning connector from Apple.

Now only USB-C should remain – almost on any device and regardless of which manufacturer. In addition, the sale of chargers should be distinguished from the sale of electronic components – consumers should also be able to choose whether they want to purchase a new electronic device with or without a charger.

It depends on the manufacturers whether the cable is included in the sale, for example for data transfer. In addition, fast charging technology has to be harmonized. This is to prevent various manufacturers from limiting the loading speed unreasonably.

The American company Apple vehemently rejected the proposal of the commission until the very end. It wants to stick to its in-house Lightning connectors, which are currently installed in all iPhones and some tablets. “We are concerned that strict regulation by mandating only one type of connector is affecting it rather than encouraging innovation, which in turn will harm consumers in Europe and around the world,” the company said in a statement.

The main adapters are already based on USB-C, and with the forced change, according to Apple, the amount of electronic waste will increase several times. One reason for Apple’s resistance is likely to be the revenue the tech giant generates with its “Made for iPhone/iPad” (MFI) program. Third-party manufacturers of Lightning cables must certify their products there.

Two out of three chargers unused

The commission argued that the proposal would benefit both consumers and the environment. Overall, it is not just electronic waste that has to be reduced by about 1,000 tonnes in the future. Consumers should also save around 250 million euros this way – according to the commission, only two out of three chargers purchased are actually used.