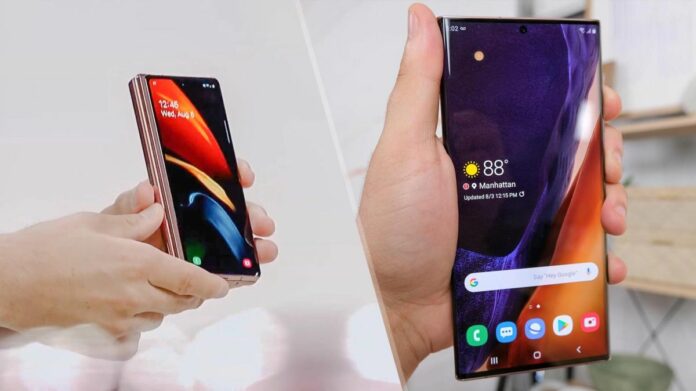 With the Samsung Galaxy Note 20 Ultra and the Galaxy Z Fold 2, Samsung has a pair of new phones that offer big screens and big prices to match.

The Note 20 Ultra is the latest version of Samsung’s line of Galaxy Note phablets, equipped with the largest display Samsung’s ever offered in a conventional smartphone. The Galaxy Z Fold 2 is anything but conventional — it’s a foldable phone that follows up on last year’s Galaxy Fold, with hopefully enough design improvements to avoid its predecessor’s rocky launch.

If you’ve got $1,000 and change — lots and lots of change — to spend on a new handset, which of Samsung’s two behemoths should you pick? In this Galaxy Z Fold 2 vs. Galaxy Note 20 Ultra face-off, we’ll see how Samsung’s big-screen devices compare.

It’s not every day that a $1,299 phone looks like the bargain buy, but welcome to the world of foldable phones. Samsung hasn’t announced a price for the Galaxy Z Fold 2, but considering that the company touted the upcoming phone as delivering “premium high-tech experiences,” we wouldn’t expect too much of a discount from the $1,980 cost of the original Galaxy Fold.

That’s nearly $700 more than what the 128GB version of the Galaxy Note 20 Ultra will cost you. Up the storage to 512GB, and you’re paying $1,449 — an eye-popping figure in most cases, but likely hundreds of dollars less than what the Galaxy Z Fold 2 is going to cost.

You can pre-order the Galaxy Note 20 Ultra as of this writing, with the phone reaching stores on August 28. About a week-and-a-half later, Samsung will reveal more details about the Galaxy Z Fold 2, including presumably the price. Rumors suggest the foldable phone will ship in September.

A Galaxy Note 20 Ultra vs Galaxy Z Fold 2 comparison is really a face-off between a phone that embodies a more traditional design and a next-generation device. The Note 20 Ultra looks like a lot of other phones available on the market today, albeit with a much larger display than you’ll find on most handsets.

The Galaxy Z Fold 2 is big, too, but in a different way. When closed, it looks like two conventional phones stacked on top of each other. But unfold the device, and you open it up to a tablet-like screen. Because the new Fold does away with the notch that housed the front cameras in the original device, the interior display has grown to 7.6 inches. Meanwhile, there’s also an outer display on the Fold 2 that you use when the phone is closed — it’s now a cover display stretching for 6.2 inches, up from the 4.6-inch screen on the original Fold.

It isn’t often that a Galaxy Note has the smaller screen of two devices, but that’s the case here, at least when the Galaxy Z Fold 2 is opened. The Galaxy Note 20 Ultra has a 6.9-inch AMOLED display, but that’s dwarfed by the 7.6-inch panel that opens and closes on the folding phone. For this version of the Fold, Samsung has included a layer of ultra thin glass to give the display a more polished feel. The Fold 2’s hinge also allows its screen to open at different angles.

The highlight of the Galaxy Note 20 Ultra’s display is a refresh rate that dynamically changes, scaling up to 120Hz when you’re engaged in activities that would benefit from smoother scrolling in graphics. Samsung says the Galaxy Z Fold 2 is adopting that dynamic 120Hz technology as well.

We won’t know for certain until Samsung reveals the specs for the Galaxy Z Fold 2. But the cameras on its foldable phone and the ones included on the Galaxy Note 20 Ultra could be pretty close.

Samsung has shown pictures of the rear camera array on the Galaxy Z Fold 2, and it includes three lenses, all stacked on top of each other. Open up the Fold, and a single front camera stares back at you from a punch-hole cutout in the phone’s main display. That sounds an awful lot like the Galaxy Note 20 Ultra camera setup — a single front shooter, and a triple lens array on the back. The primary difference is that the Note 20 Ultra includes a laser autofocus sensor, and the Fold 2 doesn’t appear to — at least based on the images Samsung has shared.

That makes us think that maybe Samsung will use slightly different cameras in the Fold 2’s rear array than what you get with the Galaxy Note 20 Ultra. That phablet features a 108MP main lens augmented by a 12MP ultra wide camera and 12MP telephoto lens capable of a 5x optical zoom.

The missing sensor on the Galaxy Z Fold 2 could mean that Samsung will opt for a lower megapixel count on the folding phone’s main lens — say the 12MP main shooter like the one on the Galaxy S20 Plus. That phone has a 64MP telephoto lens capable of a 3x zoom, and it’s rumored the Galaxy Z Fold 2 will as well. That leaves the ultra wide lens, which will probably be a 12MP sensor. Of course, that’s speculation at this point.

It’s unclear what processor will power the Galaxy Z Fold 2, but if we had to guess, it’s going to one of Qualcomm’s top-of-the-line chipset. When the Galaxy Fold debuted last year, Samsung went with the Snapdragon 855, the best system-on-chip available at the time, and it’s likely to follow the same course with the sequel.

That would mean either a Snapdragon 865 or Snapdragon 865 Plus. The latter is a variation on Qualcomm’s flagship mobile processing platform, with a faster core clock speed in its CPU and faster graphics rendering than the 865. It also happens to be the chipset powering the Galaxy Note 20 Ultra. So whichever chipset Samsung picks for the Galaxy Z Fold 2, that foldable should deliver comparable performance to Samsung’s phablet, especially if both devices feature 12GB of RAM. (The Note 20 Ultra does; the Galaxy Z Fold 2 is likely to.)

The battery could be an area of concern if you’re waiting for the Galaxy Z Fold 2 to arrive. All Samsung has said is that the new version of its foldable will have all-day battery life, drawing upon two power packs located in the different halves of the Galaxy Z Fold 2. The original Fold used the same approach with both batteries equaling 4,380 mAh. That translated to just over 10 hours of battery life on our test, which involves continuous web surfing over LTE until a device runs out of power.

Some rumors had suggested a slightly smaller battery for the Galaxy Z Fold 2, which makes us worry if the new phone can live up to Samsung’s claim. We’ll get a better idea on Sept. 1, once Samsung confirms the specs for the Z Fold 2. That said, in everyday use, the original Galaxy Fold’s battery held up pretty well, so it will be interesting to see if anything changes one way or the other with the Fold 2.

Battery life shouldn’t be a problem with the Galaxy Note 20 Ultra, which uses a 4,500 mAh power pack, and should be able to count on its dynamic screen refresh rate to help preserve battery. Samsung also includes a 25W charger with the Note 20 Ultra, which helps get the battery filled up again quickly. (Samsung says to expect a 50% charge after 30 minutes.) We don’t know what kind of charger is coming with the Galaxy Z Fold 2, though if Samsung sticks to the older Fold’s capabilities, the foldable will be able to charge wirelessly.

For the Note 20 Ultra, it’s all about the S Pen, the stylus that accompanies every Note phablet. For this iteration, Samsung has improved responsiveness, with latency reduced down to 9ms for the Galaxy Note 20 Ultra. (S Pen latency is 26% for the standard Galaxy Note 20, so that’s a big edge for the larger of Samsung’s two phablets.) The S Pen also builds upon the gesture-based controls added in previous years with new navigational gestures and improved accuracy in converting handwritten notes into text.

The original Fold introduced features like multitasking and App Continuity, in which you could open up the foldable and continue using the app you had open on the exterior screen without missing a beat. We’d expect the Galaxy Z Fold 2 to retain that feature.

Because the Fold 2 now takes a page out of the Galaxy Z Flip’s book by letting you leave the device unfolded at various angles, we expect the Z Fold 2 to get the Z Flip’s Flex mode capabilities. That allows you to use different parts of a partially opened foldable screen for different purposes.

The Galaxy Note 20 Ultra uses a tried-and-true design for anyone who wants to stay productive when they go mobile. With the Note 20 Ultra, you get a big screen capable of a 120Hz refresh rate, powered by the fastest processor available for Android phones. Throw in the S Pen — always the highlight of any Galaxy Note release — and you’ve got a very capable device.

The Galaxy Z Fold 2 is more of a mystery at this point — because there’s still a lot we don’t know about the device. Thus far, Samsung has outlined how it hopes to improve upon the original Fold, and once we know the rest of the follow-up’s specs, we’ll be better positioned to judge whether the Galaxy Z Fold 2 can take foldable devices into the mainstream.

The Galaxy Note 20 Ultra is the safer pick at this point, but there’s plenty of intrigue surrounding the Galaxy Z Fold 2 that we hope to clear up in the coming weeks.

See also  Did Fortnite just get rid of the Application Shop as we know it?