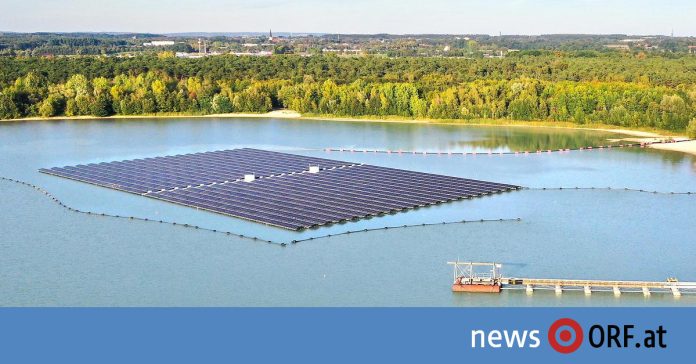 According to a BBC report, there has been a global boom in the construction of floating PV systems in recent years. Watt peak – the term commonly used in photovoltaics for the power output of solar cells – increased from 70 to 1,300 between 2015 and 2020 alone. Of course, floating solar systems are still a niche project – according to estimates, the global share of PV systems is only one percent.

But experts are anticipating considerable growth and enormous potential. After all, the systems have the obvious advantage that they can be built over bodies of water whose surfaces are currently uncultivated. For this, reservoirs, reservoirs, sand extraction ponds, mine ponds and similar reservoirs are ideal. There are also uses at sea – particularly in coastal areas and in connection with offshore wind farms. However, wind and weather are the major uncertainties here.

The biggest advantage is undoubtedly the space saving. The BBC, citing an analysis by Singapore’s Solar Energy Research Institute (CERIS), said that if ten percent of all man-made reservoirs in the world were equipped with floating solar systems, the result would be a capacity of 20 terawatts. This is more than 20 times more than all the existing photovoltaic capacity in the world today.

However, there are other advantages as well: for example, the natural cooling effect of water increases the efficiency of the panels, and the shade provided by solar panels can reduce water evaporation, lowering the temperature and thus Can improve water quality. , The use in existing hydroelectric power plants is also particularly interesting, where there could be synergistic effects with existing electricity infrastructure. Among other things, they can help overcome periods of drought.

Fishing down, solar up

Particularly in Asia, experiments with solar systems on the water surface have been going on for a long time. The Hangzhou Fengling Solar Fish Farm was opened in 2017 in the Chinese province of Zhejiang. While about 30 hectares of fish are being reared underwater, thousands of solar modules are producing solar power above the water surface. Upon completion, the plant will have a capacity of approximately 320 megawatts (MW). For comparison: this is twice the planned capacity of Austria’s largest PV system, which is currently being built in Nickelsdorf.

A solar system that is even larger in terms of surface area can be found at the Sirindhorn Dam in Thailand. A hybrid system with over 144,000 solar modules was installed on the 720,000-square-metre water surface, which converts sunlight into electricity during the day and generates hydroelectricity at night. Its output is said to be 45 MW, with the aim of saving 47,000 tonnes of carbon dioxide emissions annually. Thailand wants to build 15 more such plants. India wants to overtake both projects and is planning a 600 MW plant at the Omkareshwar Dam on the Narmada River.

But even smaller countries are toying with the benefits of floating solar systems. They are particularly interesting for highly developed countries with very little landmass – for example Japan, South Korea and Singapore. There, the construction of PV systems often fails due to lack of space and alternative uses, dire land prices, resistance to large-scale projects, and strict regulation.

Europe is also following it now. The Netherlands, which has a wealth of artificial bodies of water, is one of the pioneers, where floating solar systems are expected to make a significant contribution to the energy transition. Germany and Great Britain also have the first systems. One is also currently being built in Austria – specifically in Gräfenwörth (Lower Austria). In the future, it will supply green electricity to about 7,500 homes, and is planned for spring completion – more on this below noe.ORF.at,

more expensive to manufacture and maintain

But construction also presents special challenges. They are more expensive to install and maintain than land-based systems, and have a higher risk of pollution and erosion. Water law requirements and conflicts with other water uses – such as shipping, fishing or recreational use – can become a hindrance, as well as conservation considerations.

According to a Lancaster University study, floating solar systems in the wrong places can also degrade water quality and pose a risk to wildlife in the water.

go with the sun

Furthermore, floating PV systems are difficult to position. A new pilot project in the Dutch lake Oostvoornse Meer addresses this problem – it’s the first floating solar system equipped with panels that automatically adjust to the sun’s course. Appropriate tracking systems can increase efficiency by about a third.

Despite these obstacles, significant expansion of the technology is expected. That too will be necessary – because even getting close to climate targets requires a significant expansion of solar power generation. According to the International Energy Agency (IEA), six times the current amount only needs to be achieved by 2030 to reach a “net-zero emissions by 2050” scenario. This expansion requires greater commitment from politics and the private sector.

See also  Phasing out oil and gas heating: legislation may be delayed