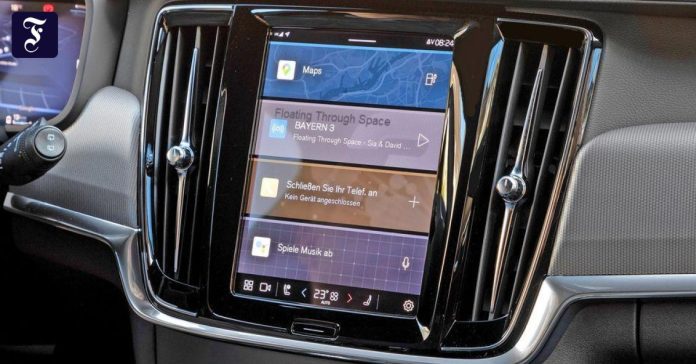 wooIf you drive a new car with sophisticated communication technology, you probably have Apple’s Carplay or Google’s Android Auto on board. Both systems are based on the idea that data from a smartphone is displayed on the vehicle’s on-board monitor. As a rule, mobile phones are connected by cable, and recently this has become possible even wirelessly. A small menu on the screen shows selected apps, and Carplay or Android Auto is usually used when it comes to navigation. Maps and navigation directions are sent via mobile communication to the mobile phone and then transferred to the monitor. That way, a built-in navigation system is unnecessary, and you can even check your calendar entries or new messages on the on-board monitor.

What matters is what plays in the middle

At first glance, the onboard monitor looks like any other Volvo: The 9-inch diagonal display is portrait-oriented, with only one physical menu button at the bottom, and the bottom tenth of the screen always shows two virtual buttons for more menus. . and air conditioning settings. The deciding factor is the one that plays in the middle: the different Android automotive apps with the symbols on the smartphone.

You log in with a Google Account and can quickly access personal data such as a contact directory and calendar, and use voice controls to place precise Hey Google orders from cell phones or Google smart home products. If the car is used by different family members, it is advisable to create a new Google Account, or have each driver switch accounts upon arrival in the vehicle. If you don’t want to send any data to Google, you don’t register with an account so you don’t need to use the Play Store, but you can certainly still use navigation.

Apps arrive in the car via the Play Store, and this is where you immediately come across the first limitation: Every app has to be optimized for Android Automotive. Aside from Google Assistant and Google Maps, there’s currently only a small selection: Spotify, YouTube Music, ARD Audio Library, Amazon and Tidal Music, some radio apps, and Sygic navigation. Volvo contributes additional apps, for example for Bluetooth music playback or telephony from a smartphone and vehicle functionality.

You don’t need to bring a smartphone. If one is available, of course it can be connected for telephony and music playback, including on the iPhone. Google Maps navigation works fine, though the co-pilot’s hoarse voice is annoying. However, there’s a finer detail: Optical driving directions are also played out in Volvo’s heads-up display, which is pretty convincing, as may be available. You start Google Assistant with the voice control button on the steering wheel.

With Google integration, it is possible to control network devices at home, directly from the car. For example, you can turn on the lights when you come home or wake up the vacuum cleaner robot after you leave. In contrast, orders can be sent directly to the car from the breakfast table, for example to preheat the interior on cold days.

Android Automotive is standard on all V90s. The traditional infotainment is “Census Connect” history. So far in V90 it has cost more than 3000 euros. Viewed from this point of view, this progress can be welcomed. Please note, however, that after the latest four years, a data contract will become payable, subject to a surcharge. Incidentally, there is still no counterpart to Android Automotive from Apple.