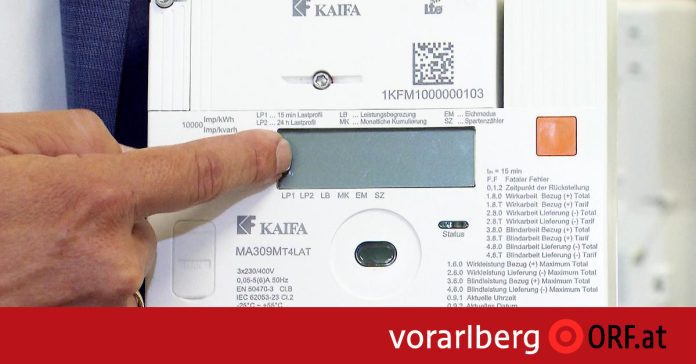 In times of inflation and rising energy prices, many people consider how they can save on electricity. In order to do that, however, they need to know what the big power guzzlers are at home. Intelligent power meter “Smart Meter” can display power consumption in 15 minute intervals.

By the end of 2024, due to an EU regulation, 95 percent of all electricity meters in Austria must be replaced by digital “smart meters”. “Smart meters” are digital counters for recording power consumption at regular time intervals. Consumption values ​​are transmitted to the network operator so that it is no longer necessary to read them on site. In Vorarlberg, a total of about 217,000 electricity meters are to be replaced, 60,000 have already been replaced, which corresponds to a rate of about 30 percent. Vorarlberg Netz, a subsidiary of Illwerke/VKW AG, is currently taking up about 1,500 meters of space per week. For this, 25 fitters are on duty.

The “smart meter” is installed in a standard setting. The customer gets the electricity consumption of the previous day once a day. There is also an option to “opt in”. If you select this option, you get 15 minutes of readings from the previous day. It can be precisely checked that in which quarter the power consumption was the highest and which day was the lowest an hour ago. There is also an exit option. If you select this setting, only the current meter reading is displayed.

“You can’t see from the curve whether a light is turned on or off. Large power consumers, such as a sauna or similar, can affect the curve,” says Christoph Bertscher, a company spokesman for Vorarlberg Netz.

“As a network operator, we are raising awareness of energy issues among customers,” says Bertsher.

Criticism of “smart meter” in terms of data security

Criticism of the new devices stems from the “Stop Smart Meter” initiative. Among other things, they are concerned about data security. The fear that sensitive data could fall into the wrong hands was dismissed by Vorarlberg Netz’s managing director Johannes Terscher as soon as it was introduced. In the unlikely event that this would happen, it would just be a jumble of numbers with which no one could have done anything. Billing-relevant only but no personal data will be transmitted.