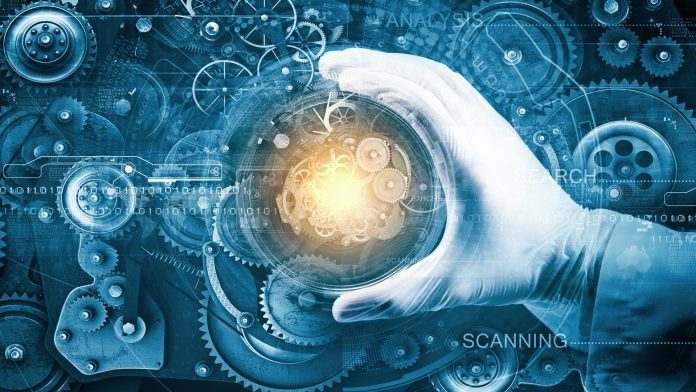 Without further interference, the rotation will go back and forth at random. Therefore, the team also immersed two electrodes in the solution and allowed an alternating current to flow. The alternate direction of tension changed the energy landscape experienced by the longer DNA arms, making rotation in one direction more favorable through a mechanism known as the blinking Brownian ratchet.

It turned passive devices into actual motors. The micrographs show that under these conditions, each arm—though it vibrates randomly—always rotated in the same direction on average.

By itself, the nanomotor does nothing more than overcome the resistance of the surrounding solution. “It’s like swimming: You move and do a lot of work that evaporates into the water,” Dietz says. But to show that the motor could potentially do useful work, the researchers went one step further: They attached another strand of DNA to its rotor and used it to turn gears in a mechanical clock. Allowed to coil like a hairspring. Such a mechanism could help nanomachines store energy or pull other mechanical components, says Dietz.

For him, the motor is the important first proof that the principle works and that DNA origami techniques can help produce not only stable nanosystems, but also the ones that work. “Of course, I was very pleased with the publication of my work in ‘Nature’,” says Hendrik Dietz. “For me, it’s an incentive to think straight about the next project.” Eventually, the name of his chair has been changed from “Molecular Design” to “Molecular Robotics”.