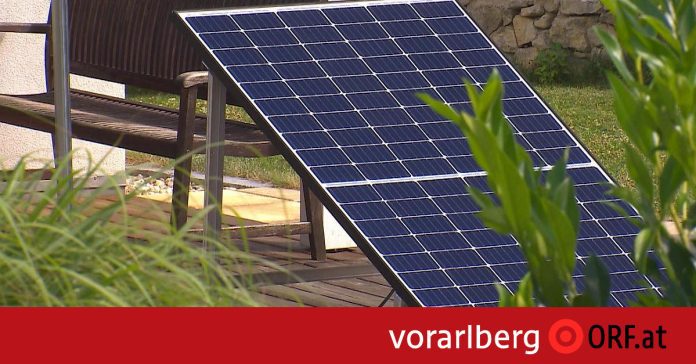 Due to the energy crisis, more and more people are looking for ways to save electricity or even generate it themselves. Hence the interest in solar energy has increased tremendously, as now everyone can install photovoltaic panels even on the balcony or in the garden shed.

Online from tomorrow at 7.25 pm

To be able to generate and use sustainable solar energy, large roof areas are no longer needed. Photovoltaic systems can also be installed on balconies or garden sheds. Such photovoltaic modules can supply 400 kilowatt hours of electricity per year.

Inquiries are growing about photovoltaic systems for balconies

Although this is not a real trend yet, the Energy Institute receives inquiries about it. For example, people ask what’s possible with such a system: “If the system generates about 200 to 400 watts, you can operate a variety of devices with it,” says Dieter Bischoff of the Energy Institute. For example, a refrigerator that consumes about 100 watts when powered on would be an option. But it is also possible to operate a television or laptop.

As heat is involved, such as in a washing machine or during cooking, the power requirement is enormous. Such a system alone cannot do this. “But you can still contribute a portion,” Bischoff explains.

power plant on the balcony

Because of the energy crisis, more people are wondering how to save electricity – but also how to generate it easily. In particular, the interest in sustainable solar energy is becoming even more intense. What’s more, now that everyone can install photovoltaic panels on balconies or in garden sheds.

Photovoltaic system should be allowed

However, a photovoltaic system should be allowed on the balcony. As a tenant, you need to ask the owner of the apartment, for example, a residential complex to have the community of owners agree.

Electrician is required to connect the equipment

Photovoltaic systems sometimes operate in a questionable manner. Some providers advertise that you can connect the system directly to the socket. “When you research the Internet, you often hear about plug-in systems,” Bischoff explains.

It would technically be possible to simply plug in the system, but it is not allowed. “In Austria you have to connect the system permanently. For this you need an electrician,” says Bischoff. In addition, a report to the energy supplier is required. Own generation up to 800 watts is allowed .