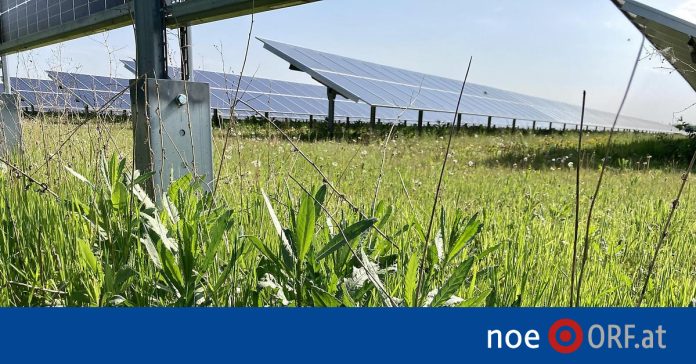 In Guntramsdorf, the sun is used twice. The University of Natural Resources and Life Sciences Vienna (BOKU) grew potatoes at the Wien Energie site between PV modules. “They have similar yields or only minor losses compared to farming without photovoltaics,” says Alexander Bauer, an employee in the Department of Agricultural Engineering at BOKU. But long-term studies are still missing, and it is not yet possible to make a reliable recommendation as to which crops will grow well in such systems.

“It depends on the light requirements of the crops and the season. In a hot, dry year, Agri-PV also has a positive effect as the modules cast shade. The system can also affect wind speed and evaporation,” explains Bauer. Plants that need a lot of sun, such as corn, will not grow well between PV modules.

The plant next to the motorway supplies electricity to about 1,200 homes. “For us, the conclusion was that the cable should be laid separately from the module to the floor and then through different rows of panels so that the farmer does not damage the cable when he passes through here with the equipment,” says Herbert Brandner, head of the renewable energy division at Wien Energy.

In all ORF media, May 17-29 On the one hand the theme of “climate and energy” and on the other side “return of the forest”.

There is still much to come for these networks with the energy transition. According to calculations by the Austrian Energy Agency, 2.7 terawatt hours of electricity should also be generated by photovoltaics in Lower Austria by 2030 to achieve the energy transition. The energy transition is understood to mean the turning point from which Austria can fully and independently supply itself with green electricity. Currently, the federal state generates 0.48 terawatt hours of solar power. So the value should increase by about six times over the next eight years.

For example, the federal states bear much of the responsibility for this detail, as they determine the spatial plan. The State of Lower Austria is currently working on a zoning plan for photovoltaic systems – i.e. designated areas in which photovoltaics are to be implemented over open spaces. Priority should be given to used or polluted areas such as landfills. High quality agricultural land will not and should not be used for PV systems in the future. Zoning plans should be available in the summer.

Interested parties notice that PV systems are booming less and less as modules are sold out and the required installers are often completely booked out for months. It was recently stated by Netz Niederösterreich that many small systems with feed-in would destabilize the grid – more on this PV booms cause grid problems (noe.ORF.at; May 6, 2022). Herbert Brandner says that with large systems like Guntramsdorf, however, this is not a problem because they feed into the higher-level grid.

See also  Many AS Roma players can't sleep because of Fortnite

Not only could soil supply more electricity in the future – a company based in Amstaten is developing PV modules for water surfaces. Since last summer eight modules have been tested on a gravel pond in Pochlern (Melk district). According to the company, they are wind and wave resistant and suitable for fresh and salt water. In Austria, the company sees potential at the top of reservoirs. The effects on animals and plants in lakes and ponds have not yet been researched.

In terms of research, photovoltaics on agricultural land are already ahead. Guntramsdorf was one of the first attempts in Austria in 2019. With the knowledge gained there, Wien Energy built a PV system in Vienna-Donstadt that was three times as large. “Winter wheat, spelt and soy are grown there,” says Herbert Brandner.


PV on roofs is not enough

80 percent of Wien Energy’s PV systems are on rooftops, and this remains the preferred use, “Nevertheless, we need every opportunity to generate electricity at this pace to achieve the energy transition as it is ten years from now.” No,” Brandner says.

This would not be possible with ceiling surfaces alone. “It is important to have a portfolio of energy generation plants in Austria to make use of every sector so that we can supply energy independently.”

Even though Guntramsdorf and Donstadt have had good experiences with mixing agriculture and PV: no two fields are alike, and “agriculture doesn’t work that you test for a year or two and then you know that How to do it. “We need five to ten years of experience to know what works best and where to be careful,” says Alexander Bauer. But what’s great for PV in open spaces: “We do not seal any area, the system can be completely destroyed and after use becomes pure agricultural land again.”