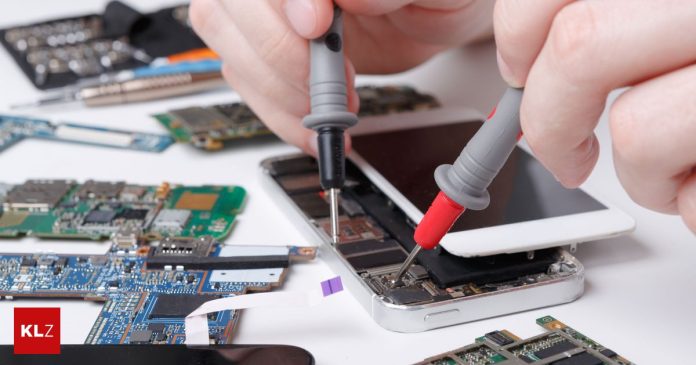 Almost everyone has had such experiences. Whether cell phone, printer or vacuum cleaner: If an electrical or electronic device suddenly doesn’t work, it can be expensive to repair. Often even more expensive than buying a new model. The German Consumer Protection Association estimates that the average lifespan of a smartphone is only two and a half years before it is disposed of. The nationwide repair bonus aims to reduce the massive waste of resources and energy.

The new regulation, for which the climate ministry has initially budgeted 130 million euros, will take effect from Tuesday: if you want to repair a faulty appliance, you can use a federal voucher that covers the total cost of the repair. Covers half. (maximum 200 euros). Billing works through participating companies, and bonuses can be received on their own for each device in need of repair on the new website www.REPAIRBONUS.AT Application for. According to the climate ministry, now more than 1000 companies have registered to participate. The same list can be viewed on the website, which is constantly being expanded to include further registrations. Partnership requirements for companies: A branch in Austria and the relevant business license in the relevant region.

as many repairs as you want

Repairs to nearly all electrical home appliances and entertainment electronics for personal use are funded – from coffee machines to e-bikes to notebooks. One voucher can be requested per device, which is then valid for three weeks. A new voucher can be requested for another device as soon as it has been redeemed or expired. There is no upper limit for per capita funded repairs.

According to Climate Minister Leonor Gewesler (Greens), the subsidies should help reduce the mountain of waste and encourage further use. “Repairing is always better than throwing away. Together we can save valuable resources,” she said recently.

The city of Graz, which launched a slightly different repair bonus in 2018, is now eliminating its own model. According to the responsible city councilor Judith Schwentner, it was accepted by 4,000 people per year. However, federal funding campaigns have now doubled to 200 euros.