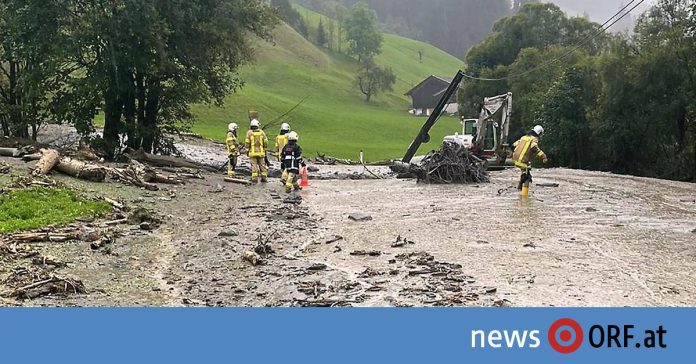 Within minutes the weather changed in Carinthia, from a blue sky to an apocalyptic mood. The people of St. Andre C in Carinthia did not have time to take shelter. Two girls died when a tree fell. There were also two deaths in Lower Austria.

How meteorologists and officials should warn about such sudden weather events is controversial. Experts at the Central Meteorology and Geodynamics (ZAMG) say last Thursday’s thunderstorm line developed more violently than forecast models calculated. A thunderstorm warning had been issued since the previous day. Nothing went wrong in terms of the procedure, ZAMG told ORF.at on Monday. Unlike big storms like “Kirill” in 2007, thunderstorms are always hazy. But the question still remains: How can citizens be reached in an emergency?

There are already alerts through SMS, but the condition is that users register with the respective services. The Interior Ministry also offers its own app called CatWarn, which also warns of disasters when you download it. The well-developed siren alarm system in Austria will also remain in place.

For some experts, last week’s warning was not enough. Harald Eitner of Styria’s Department of Civil Defense criticized that a 20-minute advance warning was not enough to warn the population. Meteorologist Jörg Kachelmann complained on Pulse 24 that Austria could have been warned in good time: “In this weather, no one should die.”

In the future, a new system will give warnings anyway, regardless of registration or download. With cell broadcast technology, anyone who is in the endangered location should receive a push message on their cell phone. The system is based on a network of radio masts that all mobile phones dial at the regional level. The owner does not need to specifically register for it, and no data is saved.

But for this technology, mobile operators and the authorities that can trigger warnings (nine state warning centers and the interior ministry) need to set up their own infrastructure. Existing options, such as when the location of mobile phones through radio masts is determined after a court order, are not sufficient. This requires your own interaction of hardware and software components and additional functions, which you must first organize according to ORF.at, for example on A1. The initiative will be supported, but financing and technical issues must be clarified first. We are waiting for regulation, in accordance with A1. Along with Drei and Magenta, the mobile operator is one of three providers using cell broadcast technology.

According to the Digitization State Secretariat, the regulation went into a four-week review over the weekend, but is not publicly available. The assessment also comes late: the corresponding EU directive assumed implementation in mid-June. Not only is the coordination between the mobile operators, the regulatory authority RTR and the state secretariat with the federal states difficult. The Secretariat took over the Ministry of Agriculture, but the Ministry of the Interior is responsible for implementation. The countries that are responsible for the actual warning capability are in turn responsible for the production of their triggering systems.

Digitization State Secretary Florian Tursky (ÖVP) said in a statement to ORF.at that he has had a clear focus on the subject since “the beginning of my office”. About 90 percent of the population has a smartphone, so it is obvious that it also warns of disasters. “The past few weeks in particular have shown how important and necessary it is to provide people with quick and simple information,” Tursky says.

The president of the Civil Defense Union is Tsarsky’s party colleague Andreas Hanger. In an interview with 1-MittagsJournal on Monday, he also did not address the criticism of hesitation. Could the recent accidents have been avoided by giving SMS warning, “You really have to look into this in detail. But I’m also very against the fact that when something like this happens you always immediately look for someone to blame,” Hanger says. “I don’t know the background to why this delay happened, but I have to say it is. It’s just important that it comes now and is implemented as soon as possible.”

Already in use successfully for a long time

In any case, cell transmission technology is anything but new; It has been used for years in the United States, the Netherlands, Canada, and Japan. It is also in use in Bangladesh and “a lot has changed there in recent years”, as climate researcher Salimul Haque of the International Center for Climate Change and Development (ICCAD) told Editorial Network Germany (RND) last year . The debate about new warning systems was in full swing after devastating floods in the German Ahr Valley in 2021.

Haque did not want to understand how a country like Germany had not yet got the cell broadcast system up and running. There too, implementation started off slow. Last month, the German Federal Office for Civil Protection and Disaster Assistance (BBK) announced that they were working on it in full swing. A first test was now planned for December. No date has yet been set in Austria.

ZAMG stressed that the warning system in Austria works well overall. You can see this from the siren warnings regularly tested in Austria. Interaction works with the State Crisis and Disaster Management (SKKM). On the other hand, in Germany, severe floods in the Ahr valley made it clear that over time many of the sirens were removed or were not working. Since then, these have been painstakingly renovated.

See also  WhatsApp: What does 'PLOX' mean and why do many people use it in their chats? | Technology