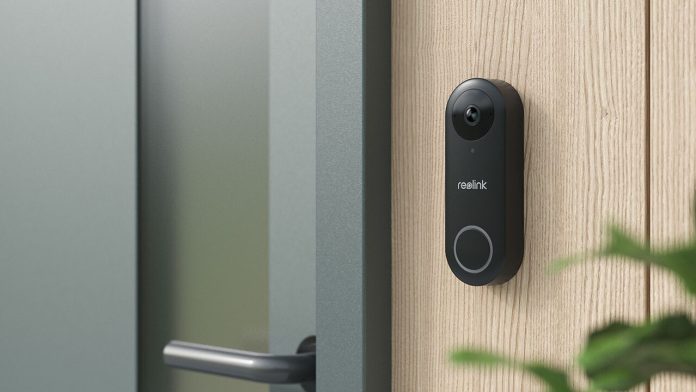 Along with the Smart Video Doorbell, Reolink is also launching a Video Doorbell. The product, which according to the company is in demand by many interested parties, is offered in both WLAN and PoE versions and always requires wired installation, for which the existing bell wire with 8 to 24 volts is sufficient.

The wireless version, which can be powered by an existing power supply from older doorbell systems, supports both 2.4 and 5 GHz wireless networks—most wireless video doorbells only support 2.4 GHz networks. The Reolink Smart Video Doorbell also delivers 5-megapixel 2K+ video, detects people, supports activity zones to selectively block areas of view from detection, and has night vision with infrared LEDs . In addition, the two-way audio function can be used to talk to people in front of the door via a smartphone.

six seconds before the action is recorded

Thanks to the continuous power supply, the camera’s recordings are supplemented by the six seconds before the recognized action, as these are permanently stored in the video memory and are constantly overwritten. This gives you an insight into what is happening before the bell activates.

On the one hand, users can use the Reolink app to select predefined answers so that the video doorbell can announce sentences like “leave the package out.” On the other hand, automatic replies can also be set up, which are always played when you are busy and can’t or don’t want to respond yourself.

Store recordings locally or in the cloud

Recordings from the Reolink Smart Video Doorbell can either be stored locally on the device on a microSD card or automatically uploaded to the Reolink Cloud, which also recently launched in Europe. Recordings can also be backed up to a Reolink NVR.

Reolink supports connection to Google Assistant and Amazon Alexa. The doorbell’s live video can be viewed on the Nest Hub, Chromecast, Echo Show, or Fire TV using voice commands. While Google Assistant will be supported at launch, video playback via Amazon devices will happen shortly.

Reolink also offers an additional, wireless doorbell for the socket, which notifies acoustically and optically when the video doorbell is ringing. Other smart home devices that draw attention to the ringing besides smartphones are therefore not absolutely necessary. Also included is a mounting plate with a 15-degree tilt to slightly adjust the mounting angle and orientation of the camera.

The PoE version of the Reolink Smart Video Doorbell is shipped in Germany Offered for 109.99 Euro, The WLAN version is slightly more expensive at 119.99 euros.

How Hacking Superpower North Korea Is Threatening The Crypto World