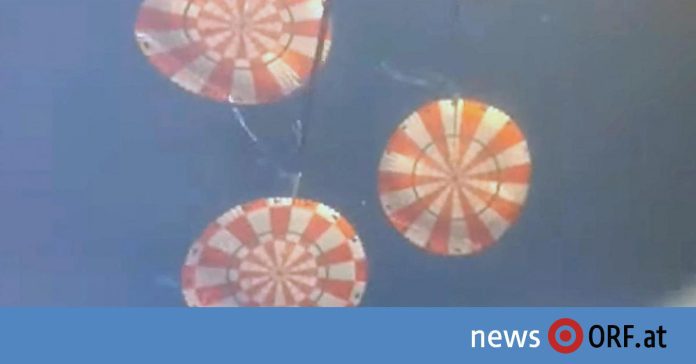 After nearly four weeks in space, the unmanned “Orion” capsule of NASA’s “Artemis 1” moon mission has returned to Earth. It landed on schedule in the Pacific Ocean off the coast of Mexico on Sunday evening, as shown in live images from NASA. “Splashdown,” NASA wrote on Twitter. The test mission is considered an important step towards bringing humans back to the Moon.

NASA wrote, “Orion” capsule is now back home. It traveled 1.4 million miles in space, orbited the Moon, and collected data. This will help prepare for sending astronauts to the Moon on further “Artemis” missions. NASA boss Bill Nelson spoke of the “historic” day.

“A historic moment and milestone in space travel,” German astronaut Alexander Gerst wrote on Twitter. “Humanity once again has a spacecraft that can take people into space beyond Earth’s orbit to explore the Moon and Mars.” He congratulated the teams involved for this “fantastic achievement”.

The return of the “Orion” capsule looked “like a picture book”, said Martin Tajmar, a space systems expert at TU Dresden, to dpa on Sunday evening. However, it may take a few days from landing to evaluation of all the data.

After landing, “Orion” will be towed to the port of San Diego. Even before landing, Nelson described the “Artemis” test mission as an “extraordinary success”. With the “Artemis” program, named after the Greek goddess of the moon, American astronauts are about to land on the moon again in the coming years, including for the first time a woman and a non-white person.

Twelve astronauts have gone to the moon so far

“Artemis 1” was launched – after skyrocketing costs and repeated postponements – on November 16 with a “Space Launch System” rocket from the Cape Canaveral Cosmodrome in the US state of Florida. All the planned milestones then followed for about four weeks: flyby to the Moon, swing into Moon orbit, swing out of Moon orbit, another flyby by the Moon — and now: landing.

This was considered the last major challenge of the test mission: “Orion” flew through the Earth’s atmosphere at a speed of about 40,000 kilometers per hour and was then slowed down to about 480 kilometers per hour. The heat protection shield of “Orion” has to withstand a temperature of about 2,800 °C.

The European Service Module (ESM) was separated about 40 minutes before landing. At the end of the mission, nothing was left of this drive and supply unit, which supplied the crew module with electricity, water and air – it burned up in Earth’s atmosphere as planned. The European Space Agency (ESA), like the space agencies of many other countries, is involved in “Artemis”.

While NASA was completing the first stage of its return to the Moon with “Artemis 1,” a rocket with a lander from Japanese company iSpace on board was launched from Cape Canaveral toward the Moon on Sunday. If all goes according to plan, the lunar module, codenamed “Hakuto-R”, should touch down on the lunar surface in late April.

It remains to be seen whether this will be the first successful private lunar mission. Rival companies plan to take a more direct route to the Moon as early as next year. Should they also be successful, they could get there sooner than “Hakuto-r”.

See also  Is infrared heating worth it now?