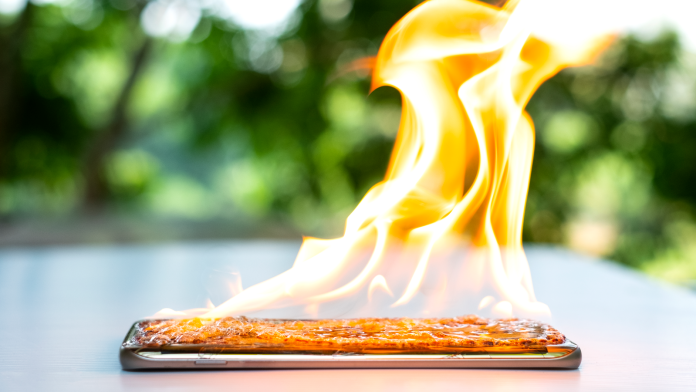 Vienna. Given the heat wave, the Waste Electrical and Electronic Equipment Coordination Office (EAK) draws attention to the fact that technical equipment is not unaffected by high temperatures. Notably, lithium accumulators, which power mobile phones, tablets, digital cameras, laptops and some 200,000 e-bikes in Austria, will also increasingly become a source of danger.

“These batteries react violently to extreme heat and mechanical damage. For example, if a mobile phone falls to the ground, invisible cracks can appear in the battery membrane,” warns Eack. These cracks also have the potential to widen during further charging processes – short circuits that can cause fires are the result of these processes. “However, through careful handling and proper disposal, the occurrence of uncontrolled chain reactions can be largely prevented,” says Elisabeth Geheiser, managing director of EAK.

A lithium battery that is already damaged can be recognized not only by the melting points on the deformed metal housing or plastic housing, but also by the fact that it heats up even when turned off. According to EAK, even the smallest, invisible injury to battery membranes can cause self-ignition. Therefore, when charging the Smartphone & Co. without charging, it is better to place them on non-flammable surfaces. However, e-bike batteries should not be charged unattended anyway.

Another tip is to avoid touching the battery contacts (outside the equipment) with metal objects, such as coins or keys, as much as possible, as there is also a risk of a short circuit. If you store lithium batteries and want to take them to the collection point in large quantities first, you should definitely store the batteries separately, for example wrapped in a plastic bag. For larger batteries, where bare contacts are visible, be sure to cover the poles with adhesive tape.

Batteries and accumulators or used electrical equipment containing accumulators or batteries can be transported to approximately 2,000 municipal collection points (waste dumps, recycling centers, etc.) in Austria, where they will be recycled in an environmentally friendly manner . Unused, small and undamaged energy dispensers can also be handed out free of charge in designated “give me empty” battery collection boxes at stores that sell batteries and accumulators.