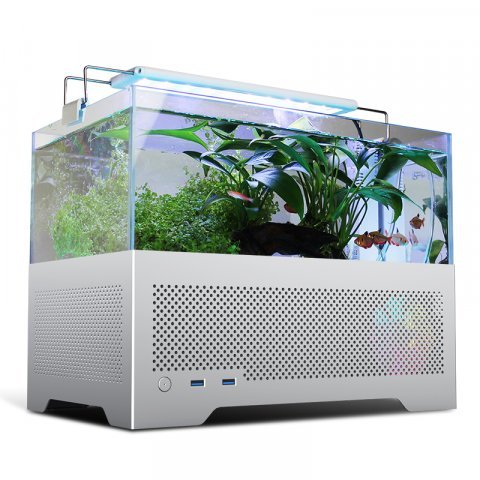 08/07/2022 at 09:30 amFrom Norman Wittkopf ,
Anyone interested in aquariums and looking for a new PC case should take a look at the Metalfish Y2 Aquarium Case.

aquarium style pc no innovation, but only in very few cases are real fish habitats provided. Chinese manufacturer Metalfish is already offering something like this in addition to the usual PC cases and is now expanding its portfolio with the “Y2 Aquarium Case”, which is a fish tank on top and a Micro-ATX case on the bottom .

Metalfish also offers a USB-powered pump with filter to supply oxygen, while an LED light bar attached to a 5-millimeter-thick glass plate at the top of the water tank is said to suit the health of the fish and plants. So probably not for synchronizing RGB gaming peripherals, reported tomhardware.com,

The bottom housing houses two 90mm fans with separate RGB lighting, which can be adjusted using the supplied remote control. Metalfish does not specify a volume, but since the habitat measures 37 × 25 × 29 cm (approximately 27 litres), the report states that there should be about 13 liters of space for the fish if divided equally. .

Meanwhile, in addition to the Micro-ATX motherboard, the case also supports Mini-ITX, while itself is made of 1.5mm-thick aluminum alloy and holds up to a 2.5-inch drive, a 90mm-tall CPU cooler, and a graphics card. . Maximum length of 220 millimeters. A smaller 1U or Flex-ATX power supply should also be used. On the front are two USB 3.0 ports.

In the meantime, there’s no mention of how the aquarium will affect PC cooling, but it may actually help the PC stay a bit cooler, while hopefully lowering the fish’s ambient temperature if the computer is at full load. will not have a noticeable effect. Metalfish Y2 Aquarium Housing is offered in China for just under US$75.