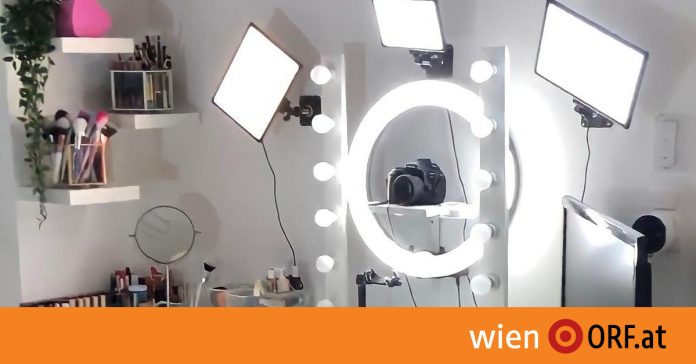 Tiktok has been competing with major social media platforms like Instagram and YouTube for some time now. According to the Institute for Applied Telecommunications, 70 percent of youth aged eleven to 17 in Austria use the TikTok app. There are tons of music tracks, filters and trends that can be used to create playback videos or just go about your daily life.

For example, Paula Wolf from Vienna is very active on TikTok. A full-time TikToker, she posts beauty content, makeup tutorials and videos related to hair, skincare and makeup. For an elaborate makeup look with body painting colour, she sometimes goes on for several hours. In any case, it owes its vast reach to its creativity. With 5.7 million followers, she is currently Austria’s most successful TikToker.

It was not originally his plan to work in the social media space. After training as a professional makeup artist, Paula Wolf actually intended to work in a makeup shop. But after she posted her makeup looks on Instagram and later on TikTok and they went viral very quickly, she continued to expand her accounts. Her Halloween looks in October and videos in which she has to master “make-up challenges” from her audience are hugely popular.

Video about everyday life in Vienna

Another successful content creator on TikTok is Lionel, who lives in Vienna and is known by his username Wurstaufschnitt. He makes satirical videos that are often related to everyday life in Vienna. For example, many of the videos deal with the specificities of different districts or issues affecting city government. In his videos, Lionel also addresses queerness and everyday racism or engages in political debate.

Most of his followers also live in Vienna. “Specifically, videos that address topics that many Viennese works may very well sympathize with,” the TikToker explained to wien.ORF.at. Facing an audience in familiar situations appears to be the key to success. The more a viewer can identify with the video, the more likely it is that the follow button will be pressed.

“TikTok is definitely a young app, which is why I design my content to age,” Paula explained. Social media stars know unlike Instagram and other apps, as they are usually featured on all platforms. Anyway, TikTok is a very entertaining app, so videos should appear very dynamic, Beauty TikToker explained.

Social media is getting faster and faster and users decide in the first few seconds whether they want to watch the video till the end or not. Lionel also recognized that the algorithm on TikTok especially favors short videos. There is less user attention on Tiktok and as a content creator you have to adapt to it.

TikTok as the flagship app of the future

What you wouldn’t expect: Lionel has been a social media avoider for years. In the world of likes and selfies, the Viennese could not do anything for a long time. “But on TikTok, I thought there was another way to show yourself for who you really are,” Lionel explained. Because of this, he decided to post a Tiktok video. Due to the reel format, which works according to the TikTok principle, it now posts videos on Instagram as well.

Mathias Jacques of the Institute for Applied Telecommunications said, TikTok will probably be with us for a few more years. Instagram currently has a higher value (81 percent) than TikTok. “But I wouldn’t be surprised if the platform comes ahead of Instagram in our assessment next year,” Jacques says. Paula Wolf also sees TikTok as the flagship app in the future. “Vertical videos are becoming more popular and people are spending more time on their phones than on their computers,” says Paula.

On TikTok, however, many hide behind their anonymity and the frenzy for perfection enters here as well. The more reach you have, the more likely you are to be criticized. Paula tries not to take the hate comments to heart anymore. For the most part, she gets positive feedback on her videos. She posts two to three videos a day which requires a lot of preparation, production time and editing time. Paula Wolf never really takes a break.

When she goes on vacation, Paula also pre-produces some videos. Still, he has to be active every day posting videos and stories. Paula explained, “Many people may not be able to guess how much work is behind TikTok videos.” For example, in Austria, TikTokers do not monetize clicks, as is possible in the United States. His income mainly comes from collaborations and YouTube views.

campaign for a good cause

Lionel describes his work on TikTok as a balance between a hobby and everyday life. Accordingly, he also takes a little less time for TikTok than Paula. However, he is still active on a regular basis and posts a video every day or every two days. He works full time in a software company. Whatever he experiences during the day at work and in personal life, he also likes to process in his videos.

“My job makes me lucky to be able to choose which campaigns I run,” Lionel said. It only wants to accept ad campaigns that are for a good cause. For example, Wurstaufschnitt explained to his followers about HIV in a video.