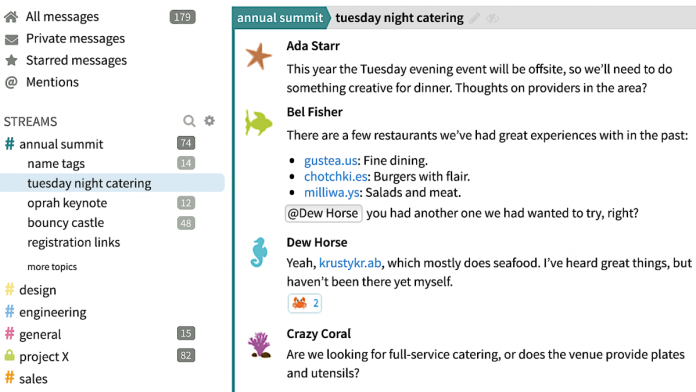 As part of the new version 5.0, Zulip introduces several new features. Among other things, entire topics can be marked as done in open source chat. This is interesting for users who, for example, want to tick off customer conversations or support questions. Users can now add an emoji to their status, which the software also displays to colleagues in all chat areas.

In addition, the developers have modified the text input: new buttons have been added for bold, italics and links. In addition, users can insert a universal time specification with a single click, aimed specifically at teams working around the world. If you want to compose a longer message, you can now maximize the input to fill the entire screen.

Permalinks to messages are also new. They remain in place even when users move the associated chat to a different topic. These links can be used both within Zulip and externally, such as in emails.

If the chat stream should be publicly visible, that could be set soon, too. This means that any Internet user can follow the conversation without setting up an account. However, the feature is still in beta, but should be generally available in the coming weeks.

Zulip now displays images more clearly: the software groups up to 20 images in a single message in a grid layout. The developers have also modified the image viewer, the corresponding tool should be easier to use.

With version 5.0, administrators can set a default configuration for new users. In addition, invitations can now be provided with an expiration date – optionally, they are valid forever. If a responsible person deactivates a user, all invite links are also invalid.

Finally, the project has also tackled import tasks: there’s a new tool that can take data from Rocket Chat. In addition, chat history of Mattermost can now be transferred to Julip.

Zulip is a free chat software aimed at business users. As an open source project, it is licensed under the Apache 2.0 License. If you don’t want to set up Zulip on your own server, you can also use the cloud version, which is free for small teams. All information about the new release 5.0 can be found here in the announcement, The predecessor 4.0 was released in May 2021 with the GIF function needed today.