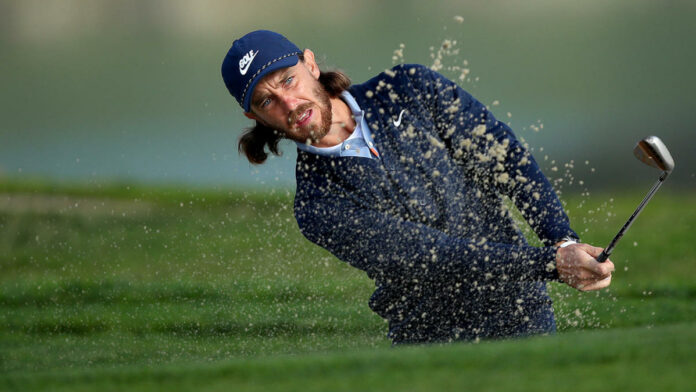 The second round of the 2020 PGA Championship on Friday was a rollercoaster that left us with a major shakeup at the top of the leaderboard. Haotong Li took over the No. 1 spot in the standings with a fantastic 5-under 65, while Tommy Fleetwood jumped 46 spots on the leaderboard to T2 after posting a week-best 6-under 64.

Tied with Fleetwood in second is Brooks Koepka, Daniel Berger, Justin Rose, Jason Day and Mike Lorenzo-Vera, all of whom sit at 6 under and two strokes off Li’s lead. But there are plenty of big-name golfers easily within striking distance of Li entering Moving Day on Saturday.

Let’s take a look at the leaderboard breakdown through 36 holes at TPC Harding Park.

1. Haotong Li (-8): With a bogey-free round of 65 on Friday, Li rose 11 spots in the standings and took over as the leader entering the weekend. His hot streak through two rounds is as shocking as it is unpredictable, after he finished T75 last week at the St. Jude Invitational and missed the cut at the Memorial Tournament. And he’s maybe more surprised than you. “Yeah, I didn’t even think I could play like this this week, especially, like you said, got no confidence,” he said post-round Friday. Perhaps that’s why he spent at least four hours practicing after his round.

T2. Brooks Koepka, Tommy Fleetwood, Daniel Berger, Justin Rose, Jason Day and MIke Lorenzo-Vera (-6): There was a moment Friday when a trainer plopped Koepka flat on his back in the middle of the rough and worked his left leg as Koepka, who has dealt with a lingering knee injury, showed some discomfort. But if it was bothering him too much, he didn’t play like it. Koepka fired a 2-under 68 entering the weekend and birdied his final hole to ensure he’ll do so with a pep in his step. He’s 36 holes away from potentially becoming the first to three-peat at the same major since 1956 and first to do so at the PGA Championship in nearly a century.

Fleetwood’s 6-under 64 tied for the best round of the week with Cameron Champ — both in Round 2 — as Fleetwood jumped 46 spots on the leaderboard. He drove it well Friday as opposed to Thursday — where he hit just 50% of his fairways off the tee. Fleetwood also cleaned up nicely on the greens. “I think I drove it really well,” said Fleetwood. “Put it in the fairway around here and it makes a massive, massive difference.”

T8. Cameron Champ, Paul Casey and Brendon Todd (-5): Following a 1-over 71, Champ tied Fleetwood with the best round of the week Friday. And he did it by crushing the ball off the tees averaging 330 yards per drive — besting Bryson DeChambeau — while showing good control, too. He carded just one bogey on the day and took advantage of every par 5, after which he uttered the words of every golfer’s dream: “Usually, whenever I swing a little harder, it goes a little straighter.”

T11. Dustin Johnson, Xander Schauffele and three others (-4): DJ turned in a 4-under 31 on the back nine to polish off a Round 2 of 66, jumping more than 20 spots on the leaderboard into the top 10. He wasn’t quite as long off the tees as he was Thursday, but he commanded control of his irons and found something with the putter, draining several long ones to work his way into weekend contention. Schauffele was steady with two birdies and two bogeys for an even-par 70, but after a strong effort in Round 1, he missed an opportunity to push up the leaderboard.

T16. Tony Finau: (-3): For a second straight day, Finau boomed it off the tee but struggled to control it. And yet for a second straight day, he finds himself comfortably in the mix with an even-par round of 70 keeping him in the hunt. He was better around the greens Friday than he was Thursday and showed some promising improvement that could bode well for him going into moving day.

T25. Bryson DeChambeau: (-2): DeChambeau summed up his round — and what he needs to improve on — like this: “I’ve got to do something special this weekend. I think I can. I think I’ve got the firepower to do that. I’ve just got to hit some fairways.” DeChambeau indeed has the firepower, but the control wasn’t there today as he found himself off the beaten path after errant tee shots, forcing him to scramble. Even-par golf isn’t bad in the windy conditions, but it’s not going to get him his first major.

T31. Rory McIlroy (-1): Rory looked to be in decent shape and rounding into form after carding birdies on 7, 8, 9 and 10 — until No. 12 unraveled him. On the 503-yard par 4, he got to the green in four and subsequently three-putted, unraveling the progress on his round and dropping him to even-par on the day. He birdied 16 and finished the round at 1 under, but swallowing a triple-bogey was a momentum-stopper for him that may keep him from contention if he doesn’t have a huge moving day.

T45. Tiger Woods (E): Tiger makes the weekend cut — barely — after squeaking out a shaky 2-over par Friday round that had him hovering dangerously close to the cut line. Tiger’s putter saved him from disaster on Thursday but he lost strokes to the field with it in Round 2, narrowly missing several that could have reversed his fortunes and put him into the red.

CBS Sports was with you the entire way updating this story with the latest scores, updates and highlights from Round 2. Check out the updates below and a more detailed leaderboard.