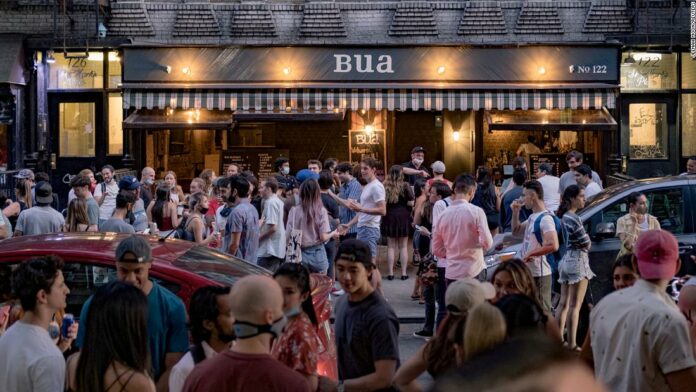 So what happened? When states reopened to try to save the economy, the fate of this pandemic shifted from government mandates to personal responsibility.

But many are not heeding that responsibility, instead letting their guard down too early due to popular misconceptions:

No. “This is not even close to being over,” the head of the World Health Organization said.
Only about 5% to 8% of the US population has been infected with this new coronavirus, meaning we have a long way to go before reaching herd immunity.

Herd immunity generally happens when 70% to 90% of a population becomes immune to an infectious disease — either because people have been infected and recovered, or because they’ve been vaccinated.

But it will be many months before a Covid-19 vaccine might be publicly available — if one becomes effective and available at all.

There’s also no cure for the novel coronavirus. So the only way to control this deadly pandemic is through personal behavior — like staying 6 feet away from others, including in social settings, and wearing a face mask.

“It is critical that we all take the personal responsibility to slow the transmission of Covid-19 and embrace the universal use of face coverings,” Dr. Robert Redfield, director of the Centers for Disease Control and Prevention, said Tuesday.

More than 127,000 Americans have died from Covid-19 in less than six months, with hundreds more deaths every day.

I’m young and healthy, so I’m not worried

New Covid-19 infections have skyrocketed in the Gen Z and millennial age groups. And while the death rate is lower among young adults, many are struggling with long-term effects from the disease.

“Specifically, I’m addressing the younger members of our society, the millennials and the Generation Z’s,” Redfield said in calling for face coverings. “I ask those that are listening to spread the word.”

In Florida, the median age group for those infected back in March was people in their 60s. But in the past few weeks, that median age has plummeted to young adults in their early 30s, Gov. Ron DeSantis said in late June.

The rapid surge of infections in Florida is “being driven by that 18 to 35-year-old group,” DeSantis said.
After Florida started reopening in early May, Erika Crisp and 15 friends went to celebrate a birthday at a bar where no one was wearing a mask. All 16 friends came down with Covid-19.

During their night out, the virus seemed “out of sight, out of mind” because they didn’t know anyone who had contracted it, Crisp said. The group also had a false sense of security, she said, because their governor said it was safe to reopen.

Days before his diagnosis, Gobert had made light of the pandemic when he jokingly touched every microphone during a news conference.

He later publicly apologized and urged the public to not fall into a false sense of security like he did.

“I wish I would have taken this thing more seriously, and I hope everyone else will do so,” Gobert said.

We’re checking the temperatures of all employees / customers / party guests

Temperature screenings won’t catch asymptomatic or pre-symptomatic carriers of coronavirus, who don’t feel sick but are still contagious.
An estimated 40% of coronavirus transmissions happen without any symptoms, according to the CDC.
Even those who do have symptoms might not have a fever. In fact, many older adults — the age group most likely to suffer severe complications from Covid-19 — don’t get a fever at all.

I don’t need to wear a mask

Howard has spent much of the past four months in Texas, where he noticed the use of face masks dropped as the state started reopening.

Now, Texas is grappling with a dangerous resurgence of Covid-19, forcing the governor to shut down some businesses once again.
At least 17 states and the District of Columbia now require people to wear masks in public when social distancing might not be possible.
Arizona, Texas and Florida do not require face masks. All three states now have among the highest infection rates in the country, with Arizona closing bars, gyms and other businesses to deal with the crisis.

If 95% of Americans wore face masks in public, it could prevent 33,000 deaths by October 1, according to the University of Washington’s Institute for Health Metrics and Evaluation.
Why top health officials reversed their guidance on face masks

US Surgeon General Dr. Jerome Adams said if you want more businesses to reopen and stay open, wear a mask.

See also  In Scotland, a lawsuit finds skeletons in the cupboards of Donald Trump's golf clubs
“Some feel face coverings infringe on their freedom of choice- but if more wear them, we’ll have MORE freedom to go out,” tweeted Adams, who was nominated by President Donald Trump.

The rate of deaths is decreasing, so things are getting better, right?

The US recently reported its highest number of new Covid-19 cases in a single day, and doctors say the rate of infection is outpacing the increase in testing.

“Our daily case/new infection rate has really skyrocketed to over 40,000,” said Dr. Jonathan Reiner, a professor at George Washington University School of Medicine.

Health experts say the current spikes in new cases coincide with what happened several weeks ago — when states started reopening and many people abandoned safety measures such as wearing masks or social distancing.
Why it takes so long after infections to learn about diagnoses and deaths
Yet while new cases soar, the daily numbers of Covid-19 deaths have generally decreased. Don’t be fooled by that, doctors say.

First, deaths from Covid-19 often lag weeks behind new infections. It can take up to two weeks for symptoms to appear. After that, people might not get tested immediately. Then, it can take even longer for severe cases to require hospitalization.

Second, many of those newly infected are young people who are less likely to die from the virus. But they can still easily infect others by just talking or breathing.

With the current rates of transmission, “we will reach 100,000 cases per day” in the US, said internal medicine specialist Dr. Jorge Rodriguez.

With this virus, “one person — on the average — infects three people, and we’re already at 40,000” new cases reported daily, Rodriguez said Tuesday.

That’s not an excuse to stop taking precautions.

“Sometimes there are false negatives, which means you have the disease but the test doesn’t detect it,” according to Penn Medicine.

Even if a negative test result is correct, you may have been infected since that test was taken.

That’s not a good idea because some intensive care units are already at or near capacity, Rodriguez said.

Even if you get coronavirus but don’t get very sick, this virus is highly contagious — and you could infect others who will need hospitalization.

And that could reduce care for anyone else who needs it — such as car wreck victims or people suffering from heart attacks.

“People are being admitted to hospital beds and being admitted to ICU (intensive care unit) beds faster than they’re being discharged” due to the coronavirus, said Will Humble, executive director of the Arizona Public Health Association.

Humble said he’s worried hospitals will go into “crisis standards of care,” which basically means “lower care for everybody, not just people with Covid-19.”

There’s another problem with waiting for herd immunity: This virus is so new, no one knows whether antibodies developed after recovering from the virus will provide any long-term immunity.

But the CDC director said everyone can help stop this deadly pandemic. It just takes personal responsibility.

“We have powerful tools at our disposal — social distancing, wear a face cover in public, and be disciplined about the frequent hand washing,” Redfield said.

“We are not defenseless against this disease.”

CNN’s Zachary B. Wolf, Alicia Lee and Amanda Watts contributed to this report.