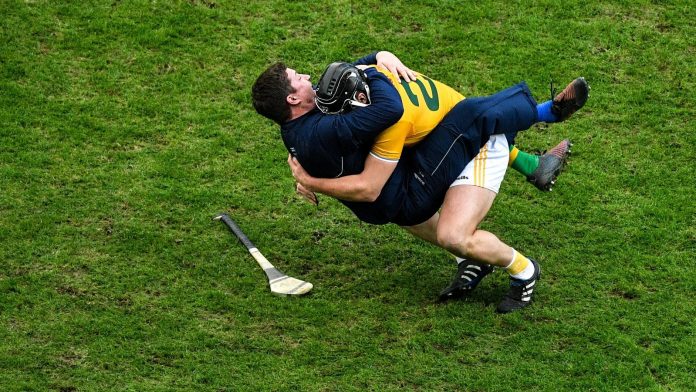 Victorian Antrim manager Darren Gleeson hopes the same Park McDonagh Cup winners can kick off and make an impact at next year’s Linster Championships after winning a hard-fought victory over Carrie in Sunday’s final at Creek Park.

The state provided familiar enemies in the undercard on the final day of the -l-Earl final, but the weight of the Saffron side expectation, which had won their previous three seats this year, was heavy.

Kerry led by one point at halftime, but Antrim’s class said after the restart and they went on to win on a scoreline of 0-22 to 1-17.

“He was being pressured to win, when you get three wins in a team,” Gleason told RT Sport after the final whistle.

“They came and set the initial tone, they didn’t allow us to break the lines and we achieved the goal we had hoped for throughout the year.

“To play them properly, it worked for 35-40 minutes, but then once we got into our stream and the panic went out of our system, I thought we actually played for 12-16 minutes.

“There was an expectation on the boys coming here that pressed them a little bit.

“We knew it wasn’t going to be easy. I was glad we got him a dog. In the end we did enough, I know you can take a look at our last quarter and it wasn’t spectacular and it wasn’t looking for people. Show it, but it was enough for me. I enjoy it once we have that cup. ”

Antrim’s elite hurling and Liam McCarthy’s return to the Cup next season presents a difficult task, but it’s one that will be accepted.

“It’s up to the players, me as manager and my team, to see what we can do next. And it’s also on the interim board.

“They’ve been fantastic all year. Now it’s also time to go after the players. Invest in Antrim.

“Antrim has a big investment in infrastructure.

“We’re not going to slip into anything. There’s a big gap in the level.

“You’ll see it between the first game and the second game.

“But that’s the only place to bridge the gap and that’s on the training field.

“If the boys buy again and say we’re going to make the right cut at this point, I think we can leave our mark.”

For Captain Connor McCann, the victory at headquarters is very welcome.

“Antrim teams have been struggling in Croke Park for the last few years.”

“We have overturned it today.

“We were down one point at half time and came back really strong in the other half, so we’re happy.

“We need to win the finals, but we’re happy with how we got back in the second half. In the first half, we struggled a little bit.

“We will be proud to return to the Leinster Championship next year and compete with the so-called ‘big teams’.”

While many pundits wrote state prospects before the throw-in, McCain never did.

“We knew Carrie would be a really competitive team to play.

“One of the games we’ve played so far was to pull a ball between the two teams.

“We knew Carrie would throw everything at us.”