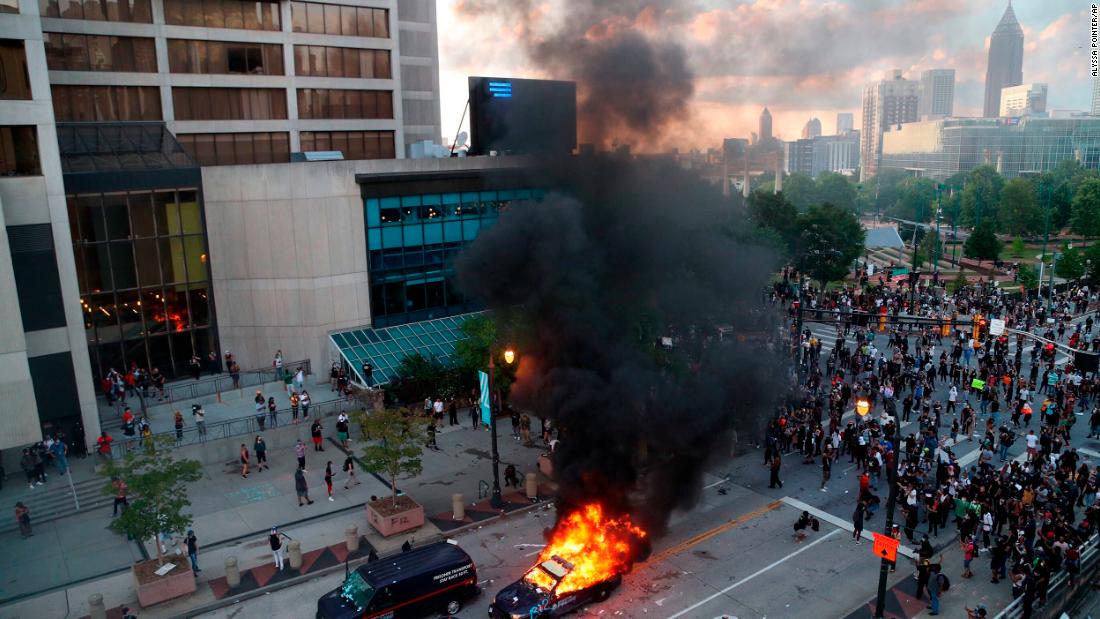 Protests began as peaceful in the early afternoon when crowds gathered in the city’s famous Centennial Park. The protests were in response to the death of George Floyd, who was killed on May 25 in Minneapolis.

At around 6:00 PM ET, protesters started moving towards the front of the CNN Center, where the police had gathered. In the next few hours, the crowd swelled when SWAT was called in to help with crowd control.

At around 7:00 PM ET, protesters could be seen damaging the CNN Center in downtown Atlanta, which is sandwiched between the Philips Arena and Centennial Park.

Protesters were seen vandalizing the CNN logo outside its offices, breaking the building’s glass and entering the center. Protesters were also heard singing anti-media rhetoric.

Around 7:40 pm, demonstrators could be seen destroying the Atlanta Police Department vehicles parked in front of CNN.

Protesters entered the CNN Center and destroyed the interior of the building at around 9:00 pm. ET. A man was seen breaking the glass inside the center with a skateboard.

Atlanta Mayor Keisha Lance Bottoms spoke directly to protesters during a press conference Friday evening: “You disfigured the CNN building. Ted Turner started CNN in Atlanta 40 years ago because he believed in who we are as a city “.

The Atlanta protests ended a complicated day for the network.

A CNN crew was arrested while presenting a live report Friday morning in Minneapolis while covering the ongoing protests. Journalists were released about an hour later.