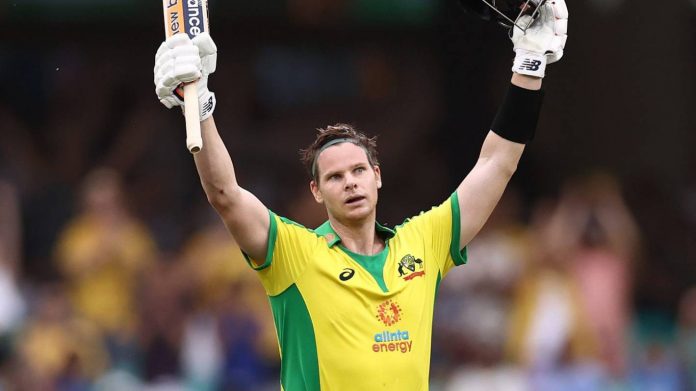 Australian batsman Steve Smith celebrated his second consecutive century against India at the SCG on Sunday.

Star Australian Australian batsman Steve Smith is watching it like a beach ball.

Smith scored his second consecutive ODI series century against India in Sydney on Sunday as Australia again scored 9389-50 in 500 overs.

The master batsman took exactly 62 balls to lift his ton, facing the same delivery on Friday when he finished with 105 runs on Friday.

His 11th ODI century – Smith was dismissed for 104 as Australia put themselves in a commanding position to win the series 2-0.

read more:
* Ford Trophy: Canterbury’s Sean Dewey dreams of a six-wicket bag on his debut
* New Zealand v West Indies: To win Glenn Phillips’ brilliant century of Spearheads
* Will Young get one more ton in the West Indies draw for New Zealand A.

His 62-ball century was the third fastest in ODIs for Australia, behind only Glenn Maxwell (51) and James Faulkner (57).

Smith was relatively patient, reaching his half-century off 38 balls before hitting 21 off 21 balls.

Australia’s runs also included opener David Werner (83) and captain Aaron Finch (0), who added 124 for the first wicket. Maxwell scored an unbeaten 63 off 29 balls, while Marnus Lubuschen played an innings of 70 off 61 balls.

This was the second time in ODI history that the top five batsmen had scored 50 runs in the same innings. The last time was in 2013 against India in Jaipur against Australia.

Almost every Indian bowler mimicked a penalty from an Australian batsman while Jaspreet Bumrah was leaking 79 runs in his 10 overs.