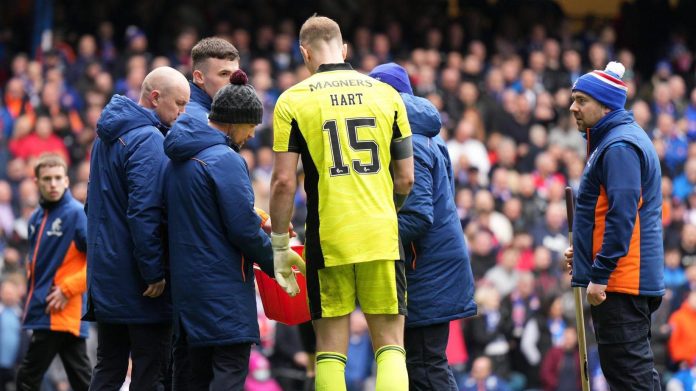 51-time Scottish champions Celtic Glasgow arguably secured early decision in the title race with a 2–1 win in the derby against Rangers. However, the game was overshadowed by ugly visuals.

With a win in the “Old Firm” derby against city rivals Rangers Celtic Glasgow Scottish Championship firmly in sight. Coach Ange Postekoglu’s team registered a 2-1 (2-1) win on Sunday and are six points ahead of defending champion Rangers at the top of the table with six games to spare. Aaron Ramsay At the Ibrox Stadium, the hosts were given the lead after just two minutes. But Tom Rojic (7th) and Cameron Carter-Vickers (43rd) turned the game around before the break. Celtic remained unbeaten in their 26th consecutive league game and are aiming for triple wins in the championship and two cup competitions.

The caregiver got hit by the glass bottle

The game was influenced by several events. After the final whistle, Celtic said a member of the coaching staff had been hit with a glass bottle at the end of the first half and needed stitches for a head wound. The bottle was thrown on behalf of the spectators.

The start of the second half was delayed due to a broken glass from the penalty area by the Celtic goalkeeper. Joe Harte Had to remove A bottle was reportedly thrown from the onlookers and broken. Folders removed pieces, the game can be continued after the delay.

Celtic manager Postecoglu condemned the incidents. “Two teams play against each other, first place and second place. You don’t need some idiot to ruin it,” he said.

See also  Vernon Kay reveals the reason behind signing up that I'm a celebrity ... get me out of here!