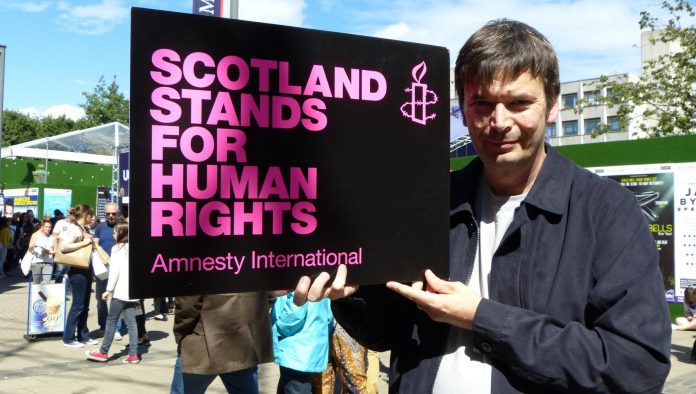 I amA Rankin, 60, one of the greatest British and Scottish writers, with his noir novels he has always lived – even this Christmas – in the UK bestseller charts (this time with the latest “A Song for the Dark Times” , Italian too soon for Rizzoli) and who was better than him for commenting on the end of the thriller that seemed like Brexit? And will the winds of freedom still be strong in Scotland? What would your famous and immortal litterateur, Inspector Rebus, say?

“Of course, a deal is better than a brutal exit with the dreaded No Deal”, Rankin told us over the phone from the Scottish capital before he started Christmas dinner, “But…”

“Finally, when it comes to voting on the agreement in the European Parliament and the different states of the European Union, will everything go smoothly?” What difficulties will we face? We should not think that everything is easy now. No need to be too optimistic ”.

Are you referring to Scotland where, according to elections, independence is being supported by a large section of citizens?

“Brexit and the Kovid crisis have led to a consensus for my Scottish independence, as the first local minister too Nikola Sturgeon Seems to communicate better than Boris Johnson, And then he is much more powerful. Despite today’s deal, the UK is not working, nor does it have a great future without the European Union. If an escape plan is already ready, why should Scotland stay in the UK, ie the idea of ​​a second referendum? Scotland has always felt a bit like European pro-Scandinavia.

Are you in favor of freedom?
“I’m not very confident, at least now to be honest. Personally, I would like things, especially about the Kovid emergency and Brexit, to calm down for a moment before talking again ”.

Not convinced for what reason?

“If the Brexit negotiations have been so complex, tense and sometimes frightening or indeed unbearable, I do not think that negotiations on possible Scottish independence would be more cordial and congenial, at least for now. Generally, I don’t think this is the right time for my country: it will cause a financial chaos, it will create even more uncertainty, especially for the youngest, already the financial crisis of 2008 and now Killed by Kovid. It is not a mind to find a country outside of nothing. It is very, very complex and it will take years, not a decade, to stabilize.

After the Brexit Agreement between the European Union and Britain, are you more optimistic, at least about greater stability in the country?

“No. I would have been optimistic if at the same time there would have been a structural change in the attitude of Johnson’s central government, a change that many people want, not only in Scotland, but in terms of deviating and giving more power to local governments Too. But unfortunately I don’t see it. I see that the Johnson government has shown the day-to-day and out-of-date horrors. Or do we want to talk about the premiere that has done a lot of its own in recent months Appointed friends with very poor qualities as God? If he did Donald Trump, We will all be autocratic. On the other hand, with Johnson, public opinion response was minimal. This is why Scottish independence can become invincible: we want change in Scotland, not London’s corruption “.

Do you see Johnson on Downing Street for a long time?

“No, because the deal may upset the party’s most radical bricks, who can now complicate life for the premier.” And then the donors and financiers of the conservative party would not be too happy: many of them only wanted a hard Brexit for personal reckoning. The deal probably made Johnson a paradoxically weak leader, especially among the Tories. Furthermore, conservatives have been in power for a very long time. Soon it may be labor’s turn Kir starrer“.

And how do you envision the future of the UK after New Year Brexit 2020, when what will materialize after the UK exits the EU?

“We have been told that this will be a ‘global Britain’, but I think we are closing in more and more like an elephant, especially on immigration.” But this is a worldwide problem. For example, in the United Kingdom we have not just one, but two nationalisms, the English one who voted for Brexit and the Scottish one who wants independence and is back in the European Union… “

Johnson announced “Global Britain”, in addition to a new world and “independent” power, at least in his dreams …
“I think this idea can be realized in the fields of culture and science, where Britain has a large ‘soft power’ and it will be a big basis for being a ‘global’ power. But right after Brexit It will take time. From Downing Street, he says that after leaving the European Union we will all be more “agile”, ie quicker and quicker. Will that really happen? We’ll see it soon. “

See also  A nutritious 30-12 months-previous guy went to a crowded bar. He finished up in a hospital on a breathing tube