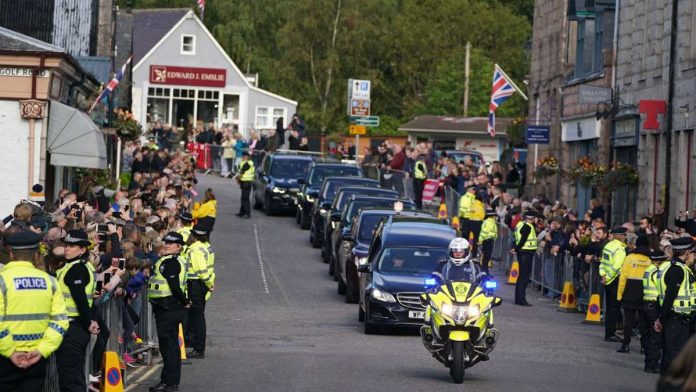 Crowds of people gathered silently in the streets in villages and towns. Some wept, some threw flowers on the road as the column rolled in slow motion. Spontaneous applause and cheers also erupted on the Royal Mile in Edinburgh. In the afternoon the convoy reached the Royal Residence Palace of Holyroodhouse. Her daughter Princess Anne accompanied the coffin in a second car, and the Queen’s sons Prince Andrew and Prince Edward were there on arrival.

Transfer to London on Tuesday

It is planned to be flown to London on Tuesday, where the deceased will be kept for several days. From Wednesday, the coffin with the body will be on a so-called catafalque – a type of plinth – in Westminster Hall of the London Parliament House. Hundreds of thousands of mourners are expected to attend.

The British government recommends that mourners should bring weatherproof clothing, adequate provisions, a mobile phone power bank and plenty of patience. Until the day of the state funeral on 19 September, the British public will have 24 hours to pay their last respects and say goodbye to their Queen. However, this requires a lot of planning time. Ministry of Culture information on the procedures says, “You will have to stand, probably all night, with little opportunity to sit, as the line will keep moving.” You should think twice about bringing kids. Road closures and disruption to transport networks can also be expected.

The state funeral, to which Federal President Frank-Walter Steinmeier is also expected to attend, is scheduled for 19 September. For this the British get extra leave. Until then, national mourning is in force, with official events and parliamentary work suspended.