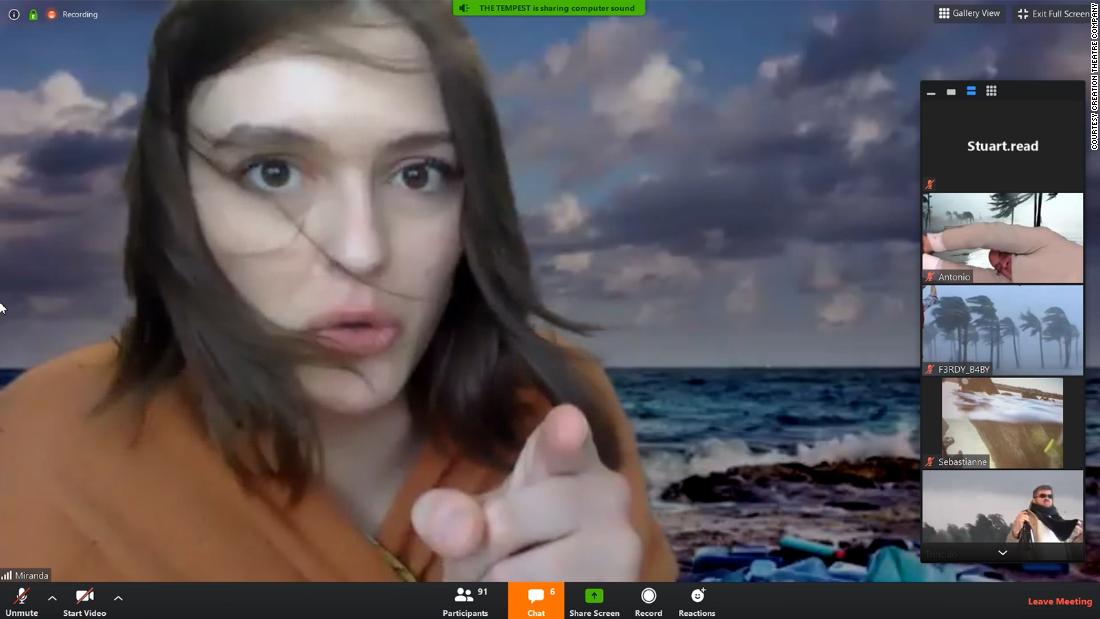 A new British production of “The Tempest” was a surprise hit recently — on video conferencing app Zoom. In isolation, costumed cast members acted out their roles against digital backdrops, while audiences gathered at home to watch this modern adaptation of Shakespeare’s tale of shipwreck and sorcery.

Creation Theatre, the Oxford-based company behind the show, is known for its site-specific adaptations of classic books — “Don Quixote” at an indoor market, “Dracula” at the London Library — but its online performance of “The Tempest,” produced alongside Northern Irish company Big Telly Theatre, was unchartered territory.

Tickets for “The Tempest” cost £20 ($25) each, though multiple people could watch one screen, and each of the 17 performances staged in April and May came close to selling out (Zoom allows up to 100 participants per video call). For chief executive and creative producer Lucy Askew, this success proves that, despite pandemic restrictions, there is still an appetite for theater and a willingness to try something new.

“I think that’s a really important message for the industry,” she said over the phone. “You can make new work, and you can pay people. There’s still a huge audience out there that wants to spend money on it.”

From West End musicals in London to live productions at the Edinburgh Festival, the UK is world-famous for theater. And like all sectors of the arts affected by the recent pandemic, it is struggling both financially and creatively. After months of closures, theaters in the UK will not open before July 4, and many venues, due to ongoing concerns about the close proximity of patrons, plan to remain shut until late winter at the earliest. The effects on the performing arts industry — which contributes £5.4 billion ($6.7 billion) a year to the British economy — will be prolonged.

Online shows can also make performing arts more accessible, both geographically — as most theaters are located in urban centers — and by providing cheaper ways to bring shows to schools, care homes or prisons, Askew said.

The sector’s bigger players are also leaning on their digital platforms, from The National Theatre streaming recorded productions for free, to Andrew Lloyd Weber launching The Show Must Go On, a YouTube channel showing his musicals. On the face of it, it looks like moving online could help extend the reach of an industry often criticized for catering to elite audiences.

But David Loumgair, creative director of Common, an organization dedicated to greater socio-economic diversity in the arts, doubts that merely transferring the usual programming — designed to appeal to city-dwelling, educated and monied theater-goers, over 90% of whom are white — from stage to screen will be enough to attract audiences with different backgrounds, interests and sensibilities.

“To what degree is this work reaching (diverse) audiences?” he said over the phone. “What has already existed in terms of live performance and culture has basically just been moved online for the same communities and audiences to engage with, just digitally.”

The problem is that theater, by and large, is geared towards certain socio-economic perspectives, he said. “Too often when people talk about representing the working class on-stage, it’s too literal. They may think they’re creating work that represents the working class, but it isn’t for a working-class audience. It’s for the middle or upper class to see their experiences and how they live.”

When it comes to promoting diversity, theaters have thus far faced public official scrutiny. And this year, British arts organizations, including theaters, will be required to report on the socio-economic spread of their employees, alongside ethnicity, disability and gender statistics, when applying to the Arts Council, a billion-dollar public funding agency.

Javaad Alipoor, whose recent production “Rich Kids: A History of Shopping Malls in Tehran” looks at how digital technology has widened the gap between rich and poor, said that while the industry’s immediate concern is supporting its workers through the pandemic, he also sees the potential for a shake-up of the status quo.

“Without the social catechism of World War Two, and the formation of the Arts Council, we wouldn’t have had the explosion of theater in the ’50s and ’60s — that first generation of working-class people, like the Angry Young Men movement, writing these pretty revolutionary plays,” he said over the phone from Manchester. “Through the 20th century, it’s moments of big social upheaval that made really interesting and exciting theater possible.”

The companies that will successfully widen their reach, he suggests, won’t be those that most faithfully replicate their existing season online, but those that consider what will resonate with different audiences and try to meet them where they are.

“In most of the theater work we’ve seen, the digital element is just about distribution and live-streaming,” he said. “That’s fine, but the really interesting stuff is where digital technology is used theatrically, it’s used to play with those questions of, ‘What does ‘liveness’ mean, what does an event mean and how do we trust the stories we’re told?'”

Lekan Lawal, resident director for “Hamilton” in London’s West End, also thinks digital tools could have a place in getting people to access theater. “It’s important to really interrogate these questions, like, ‘How do we get onto people’s phones?‘ In a real way, in as an exciting and dynamic way as listening to music or streaming a really good TV show. How do you do that but with theater?” he said in a phone interview.

One approach could be audience participation. During “The Tempest,” audience members were encouraged to leave their cameras on, allowing Creation Theatre’s stage manager to pull them into the Zoom show. “It’s like you’re at Wimbledon or at a big sports match, and they’re spotlighting the people in the audience,” Askew said. “In those moments you experience what you would at the theater or a concert. You’re all sharing a cultural experience.”

But Lawal also worries that, despite the possibilities offered by going digital, the industry’s current financial crisis could see discussions about diversity and representation, which have progressed over the last decade, put aside indefinitely.

“As a sector we’re just trying to just make sure we can survive the next three months, and as soon as you truncate your thinking to that particular point of time, everything else just goes out the window,” he said. “There’s a danger that all the progress — making (theater) more accessible, providing more entry points into the industry, giving people a sense that things are more open and representative — could be put on the back burner because we’re in a state of emergency.”

Loumgair said he has heard similar concerns echoed among “early-career and intersectionally diverse artists,” who are anxious about what the theater and cultural sectors will look like after the crisis.

‘The Land of My Fathers & Mothers & Some Other People’ by Rhys-Slade Jones, inaugural recipient of The COMMON Award 2019. Credit: Matt Austin/Courtesy Common

“It’s an unavoidable reality that we are going to be living in a very financially austere cultural ecology, and we were living through that prior to the pandemic,” he said. “That’s only going to worsen as we try to move out of the impact of the coronavirus. Where does that leave efforts to increase diversity, inclusivity and access?”

But, he adds that thinking about creating work for diverse audiences could be one way to secure economic viability. “If what cultural organizations need is economic stability, what that calls for is work that is of interest and accessible to the broadest possible audience,” he said. “That was not what was happening prior to the pandemic.”

Alipoor is optimistic about the theater sector’s ability to bounce back. “Theater has survived an awful lot of things. Two plagues, being banned (in London in the 17th century) by the puritans,” he said. “Before this crisis, more theater tickets were sold in this country than tickets to professional football games. It will survive, but the question is, how will we try contributing to rebuilding afterwards?”

Loumgair urges the industry to use this time to for soul-searching. “I think it really is an ultimatum. These institutions have a once-in-a-generation ability to reevaluate what they are putting on stage and who they are trying to welcome into their buildings,” he said. “The creative choices that can be made are so exciting, action-focused and proud. It’s one opportunity to seize that.”