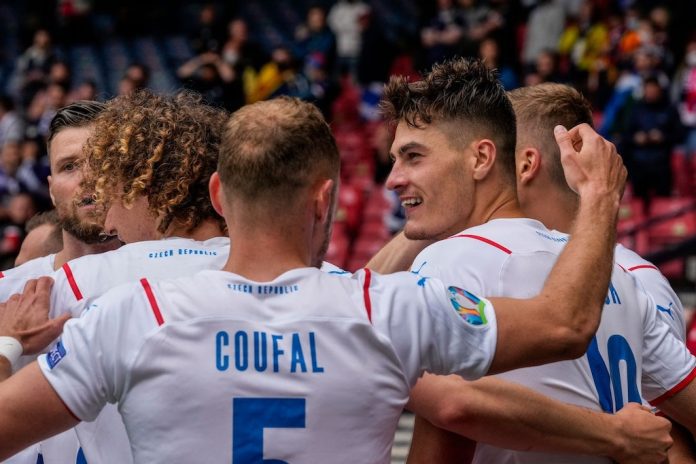 Thanks to Patrik Schick, the Czech Republic are on course for the round of 16, the Scottish return to the European Championship having failed miserably. Especially with his second round trump…

Glasgow,Patrick Schick himself was delighted when he saw his own dream goal for EM Eternity again in the replay.

Stephen O’Donnell (L) and Jack Hendry of the Scots are disappointed after conceding the first goal.Owen Humphreys / PA Wire / dpa

Scotland goalkeeper David Marshall took it too late to make it 2–0 and ended up in the net.Stu Foster/Getty Pool/AP/dpa

Patrik Schick made it 2-0 after scoring from long range.Andrew Milligan / PA Wire / dpa

With a stroke of genius from around 50 metres, the Czech Bundesliga professional crowned his stellar performance in a 2-0 (1-0) win over Scotland, which dampened the mood of the co-hosts on their return to the tournament stage. Gave. The Leverkusen striker proudly presented the Player of the Game trophy after his two goals (42nd/52nd minutes).

“It’s perfect,” the 25-year-old enthused at Hampden Park in Glasgow on Monday. “It’s a great feeling, even more so now that I’ve seen the goal on record. I hit the ball well – it’s amazing.”

“Goal of the Tournament”

With a superb long-range shot to make it 2–0, Schick realized that Scotland goalkeeper David Marshall was too far in front of goal. Czech midfielder Tomas Soucek said, “It is clear that we have already seen the goal of the tournament.” “The second goal was out of this world,” said coach Jaroslav Silhavy in awe. Schick continued his good Bundesliga goalscoring record: it was the eighth tournament goal scored by a professional employed in Germany.

Fans and the media in his Czech homeland were also excited: “That goal was chic! The Czech goal from the middle of the pitch impresses the world,” wrote iSport.cz. Scotland coach Steve Clarke did not want to blame his keeper for having to chase in vain. The opposing coach also admitted that it was only a “pretty” goal. “It’s a fantastic finish. You have to give credit to the striker here.”

Despite a self-sacrificing struggle, the Scots’ hopes of a successful start to their first European Football Championship since 1996 remained unfulfilled. Midfielder Stuart Armstrong said, “We still have two chances to do well and do something with it.” Ahead of Friday’s match against England, which beat Croatia 1-0, their chances of a first place in the knockout rounds have waned. On the other hand, the Czech celebrated himself in front of some of his own fans among the 9847 spectators.

Too much heart and passion wasn’t enough for Scotland in a game against the clever Czechs, who were well managed by German referee Daniel Siebert. The special day, the first tournament participation since the 1998 World Cup, was noticeable in every second of the game for the Bravehearts. “I hope we inspire the country and make people happy,” said captain Andy Robertson. At least it didn’t work initially. The iconic match at London’s Wembley Stadium is now even more important.

Then the Scots would have to show more final strength. Spurred on by emotional singing and cheers, the tartan army presented itself enthusiastically against the Czech Republic. When Liverpool star Robertson stepped onto the left it was typically dangerous. Klopp’s protégé Robertson was for the Scots, Hertha’s Vladimir Darida was for the Czechs. Darrida was a fixture in guest games but, like everyone else, was overshadowed by Schick.

Leverkusener Schick presented himself not only because of his goals. He tested Scotland goalkeeper Marshall, the play-off penalty taker who made the final several times. Martial was powerless when Schick scored a header, but looked poor when he scored a dream goal.

But Scotland did not give up. Jack Hendry hit the bar from 17 yards (48′). And when goalkeeper Tomas Vaklic had his own goal disallowed by a superb display by Tomas Kalas, the crowd went berserk (49th). until Schick struck again.

See also  6 nations 2022. Scotland Will Lift Its Ban, What About Other Tournament Countries?