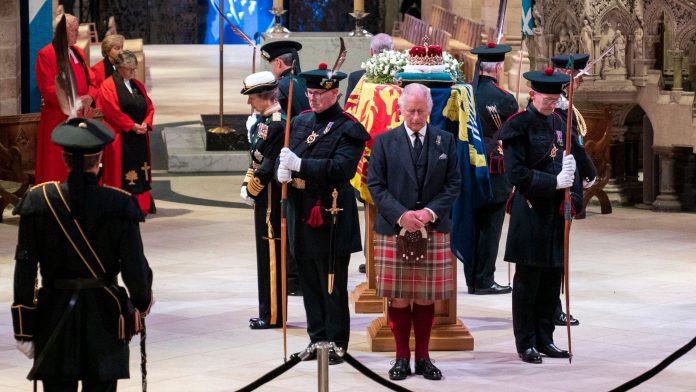 Thousands gathered at St Giles’ Cathedral in Edinburgh to bid farewell to the late Queen Elizabeth II. Sometimes there were long queues. In the evening the coffin is transferred to London.

Thousands in Edinburgh paid their last respects to the late Queen Elizabeth II. A closed coffin was laid at St Giles’ Cathedral in the Scottish capital on Monday to say goodbye to the population. British media reported that many people wept bitterly, bowed before the coffin or were cursed.

People stood in a queue of about one and a half kilometer long in front of the church. He had to wait more than two hours. As police told AFP news agency, more than 30,000 bracelets were distributed to those waiting to enter the church.

funeral procession and wake up

The Queen died on Thursday at the age of 96 at Balmoral Castle in Scotland. He was earlier transferred to Edinburgh. There was also a procession on Monday, in which the new king had also arrived. Charles III led the funeral procession with the coffin in the old town. Thousands led the way, along with Charles along with his siblings Princess Anne, Prince Andrew and Prince Edward. Every minute cannon shells were fired from Edinburgh Castle with the procession.

The procession went from the royal residence, the Palace of Holyroodhouse, to St Giles’ Cathedral, just a kilometer away, where a service was held. Afterwards, the queen’s four children stood around the coffin and made a short vigil. He stood for about ten minutes with four members of the royal company of archers who were standing guard there. A procession of members of the public passing by the coffin during the traditional vigil.

Farewell to the Queen: on the special political significance of Scotland

The coffin was taken to London

People can say goodbye to the coffin until evening, when the Queen’s remains, along with Princess Anne, will be flown by the Royal Air Force from Edinburgh to Northolt Base near London. The coffin is then taken to Buckingham Palace, where it is kept overnight in the Bow Room.

King Charles III and his wife Camilla meanwhile fly to Belfast, Northern Ireland, where they meet leaders of all parties and representatives of all religious groups. The new monarch will attend a service at St. Anne’s Cathedral before the couple returns to London. Charles’ visit is part of the days of mourning, which include visits by the new king to all four countries of Britain. A trip to Wales is also planned. Charles III on Monday morning. Recognizing the important role of representation of the people, gave his inaugural address in the British Parliament.

On Wednesday, the King will lead a funeral procession in London, which is to be carried from Buckingham Palace to Parliament. There from 5 p.m. (local time) the coffin will be placed on a scaffold in Westminster Hall, known as the Catafalk. Hundreds of thousands of people are expected to attend the Jagran. The first followers of the queen are already waiting there.

Hundreds of politicians and dignitaries from around the world and millions of visitors are expected to attend the Queen’s funeral in London. Those expected include US President Joe Biden, French President Emmanuel Macron, EU Commission President Ursula von der Leyen and heads of state of countries in which the British monarch is head of state or that belong to the 56-nation Commonwealth. Germany will be represented by Federal President Frank-Walter Steinmeier and his wife Elke Budenbender.

Japanese Emperor Naruhito is also reportedly planning to attend the funeral. This will be his first foreign trip since ascending the throne in 2019. New Zealand Prime Minister Jacinda Ardern will travel to London with a delegation of six dignitaries for the state funeral of the Queen. In addition to Governor General Cindy Kiro, Maori King Tuhetia Paki is also attending the state ceremony. “It is my privilege to attend the funeral, along with other New Zealanders, to pay tribute to us on behalf of all New Zealanders,” Ardern said. The Queen received a lot of love and admiration in New Zealand.

Australian Prime Minister Anthony Albanese announced that ten citizens would be allowed to travel to London with him. A list of selected Australians to receive special invitations to the state ceremony was published on Tuesday. These are eligible women and men from all parts of the country. Albanese tweeted that he was fulfilling a wish of the British royal family. Australia and New Zealand are part of the Commonwealth. The British monarch is the head of state in both countries.