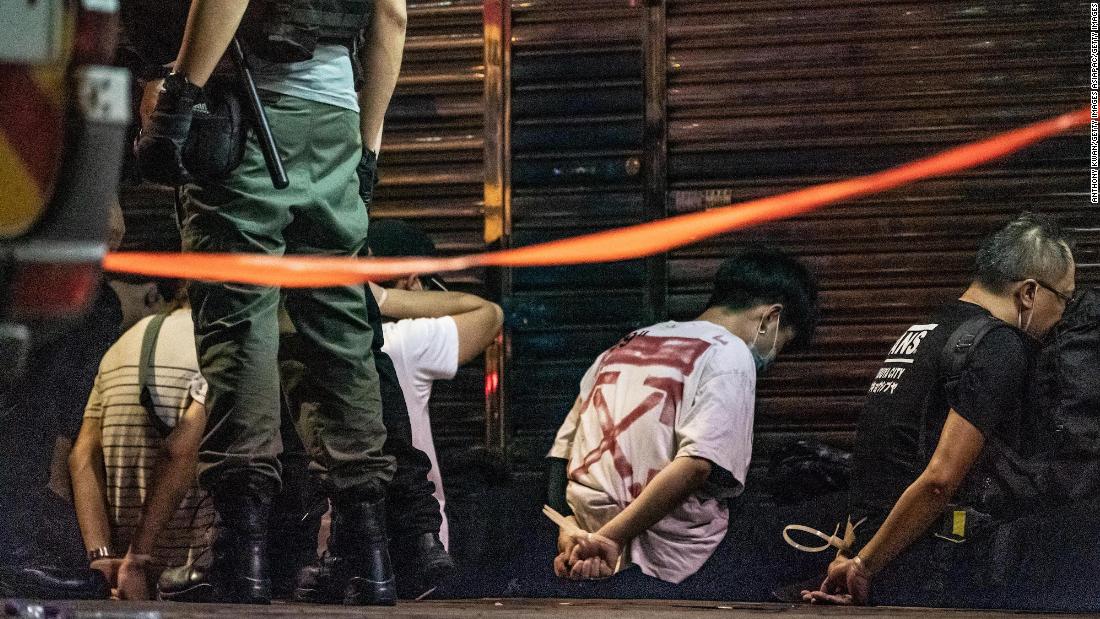 The law, which should prohibit the sedition, secession and subversion of the central government of Beijing, will be introduced through a rarely used constitutional method that could actually circumvent the Hong Kong legislature.

The move could allow Beijing to crack down on anti-government protests in Hong Kong and raise further fears that the city’s autonomy will be eroded just as the demonstrations begin to resume following a break due to the coronavirus pandemic.

Ahead of the National People’s Congress (NPC) annual meeting, which begins on Friday, spokesman Zhang Yesui announced that this year’s session would examine a proposal entitled: “Establishment and improvement of the legal system and implementation mechanism for the safeguarding national security in Hong Kong Kong Special Administrative Region. “

“National security is the foundation for a country’s stability. Safeguarding national security serves the fundamental interests of all Chinese people, including our HK compatriots,” Zhang said at a press conference in Beijing on Thursday.

He stressed that Hong Kong is an inseparable part of China and, “in light of new circumstances and needs”, it is “highly necessary” for the NPC to exercise its constitutional power to deliberate such a proposal, adding that further details would be revealed Friday.

The announcement came after a meeting of senior Chinese officials with Hong Kong delegates at the NPC.

Article 23 of the Basic Law – the de facto constitution of Hong Kong – urges the local government to “enact laws to ban any act of treason, secession, sedition, subversion against the central popular government”.

But almost 23 years after the former British colony was returned to China, the law was never passed: the latest attempt in 2003 was met with what were the biggest protests ever in the history of the city and the legislation has been shelved.

Beijing has long been frustrated by this failure and has called for the introduction of legislation. However, while successive Hong Kong administrations talked about the need to approve Article 23, it was never put on the agenda, apparently out of fear of the kind of widespread unrest seen last year due to an extradition bill with mainland China.

Those mass protests, which lasted over six months and became increasingly violent and disruptive before the coronavirus pandemic led to a partial suspension, constituted a major challenge to Beijing’s control over the city. Following a closed-door meeting of China’s main decision-making body late last year, an official statement spoke of the need to “improve” Hong Kong’s legal system, which some saw as a reference to Article 23.

See also  Ending poverty in 2020 was going to be Xi's crowning achievement. Coronavirus might have ruined it

“This law will provide a critical supply of oxygen to” one country, two systems “, an editorial from the state-run newspaper Global Times fired Thursday. “It will ensure strong blocking of interference from evil foreign forces in Hong Kong affairs and cause Hong Kong extremist opposition forces to curb their destructive behavior.”

According to local media reports, Hong Kong delegates to the NPC suggested using Beijing Annex III of the Basic Law to effectively circumvent the years-long blockade on anti-sedition legislation. Anything added to the annex must be introduced in Hong Kong “by way of promulgation or legislation”.
Pursuant to article 18 of the Basic law, “the laws listed in Annex III … are limited to those relating to defense and foreign affairs as well as to other matters outside the limits of the autonomy of the Region.” Previous laws introduced in Hong Kong by the Annex III law include regulations regarding China’s exclusive economic zone, which has an effect on territorial claims in the South China Sea e legislation as regards foreign banks.
In recent years, the Chinese government has adopted a broader view of Annex III and in 2017 added a national anthem to the law. The Hong Kong government said this month that the legislature will resume debate on this bill next week. The proposed law will make an offense punishable by up to three years in prison “for insulting the national anthem”.

The fact that it took three years before the national anthem bill received a second reading indicates the type of delay tactics and fierce opposition that any attempt to introduce Article 23 through the legislator would bring. However, the Basic Law also allows the Hong Kong government to simply enact the law, bypassing legislators altogether. Although this is highly controversial and may face legal challenges, constitutionally it remains an option.

After the forced break from the pandemic, the unrest started seriously again in Hong Kong. The national anthem law, as well as suggestions that a traditional commemoration of the Tiananmen Square massacre on June 4 could be canceled, have already kicked off the opposition movement, which hardly needed any additional motivation to resume protesting. .

Putting article 23 back – long seen as the law that would definitively write the “death of Hong Kong” – has returned to the agenda to create further anger and protests, eliminating any possibility of a return to normalcy or the healing of the city ​​yawn political gap.