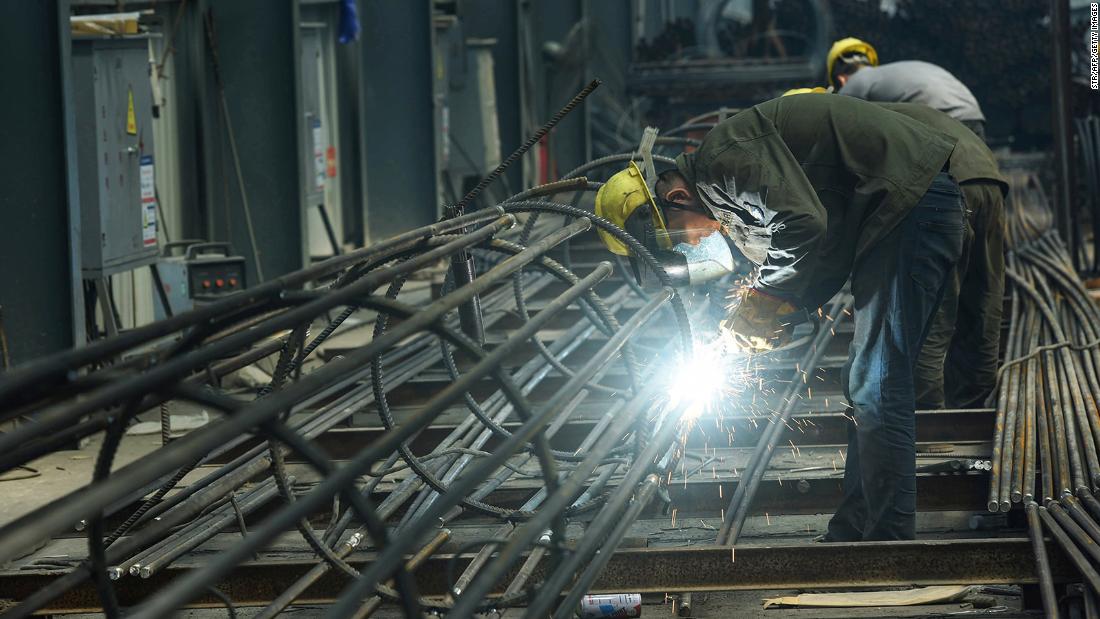 Industrial production increased 3.9% in April compared to a year ago, according to data released Friday by the National Statistical Office. This is well above the 1.5% growth that analysts interviewed by Refinitiv had expected, and production first grew since December.

Friday’s detailed growth can be attributed to the political pressure Beijing is exerting on factories to resume production, Julian Evans-Pritchard, senior Chinese economist for Capital Economics wrote in a research note on Friday.

Industrial production is expected to continue to grow as politicians in China have indicated that further stimulus measures are on the way.

But it wasn’t good news on Friday for the second largest economy in the world.

And the official unemployment rate – which tracks jobless numbers in urban areas – reached 6%, rising from 5.9% in March and just below the February record of 6.2%. Evans-Pritchard said the true unemployment rate is “probably double” from what was announced on Friday, as the urban rate does not include people in rural communities or a large number of 290 million migrant workers working in China.

“We need to fully assess the risks and challenges” of the pandemic, said NBS spokesperson Liu Aihua, at a press conference in Beijing on Friday. He said that while the virus ravages the rest of the world, China will also continue to be affected.

The Chinese economy shrank by 6.8% in the first three months of 2020 compared to a year earlier, equivalent to about 693 billion yuan ($ 98 billion) of lost production. While the International Monetary Fund He still expects China’s GDP to grow 1.2% this year, analysts warn that the country’s recovery will be pulled out.

The country’s recovery “continues but remains very irregular,” wrote Evans-Pritchard, adding that consumer-led sectors of the Chinese economy are still in trouble. The collapse in retail sales, for example, reflects “continuing tension on household finances,” he said.

There are also some fears that China may be experiencing another wave of virus cases. The country has reported four new confirmed cases in the past 24 hours, according to the National Health Commission of China. There have also been 11 new asymptomatic cases nationwide. (The country counts those separately from symptomatic cases. Two of these cases have been imported.)
Beijing could announce further economic news later next week, when the country will hold its annual parliamentary meeting after a two-month delay. The government has not yet announced a GDP growth target for this year.

Analysts predict that measures to keep employment stable will be a key priority at this meeting.

“So far, there are many local wages and factories subsidies to keep hiring stable. But it is obvious that this will not be enough,” said Iris Pang, an economist from Greater China at ING.