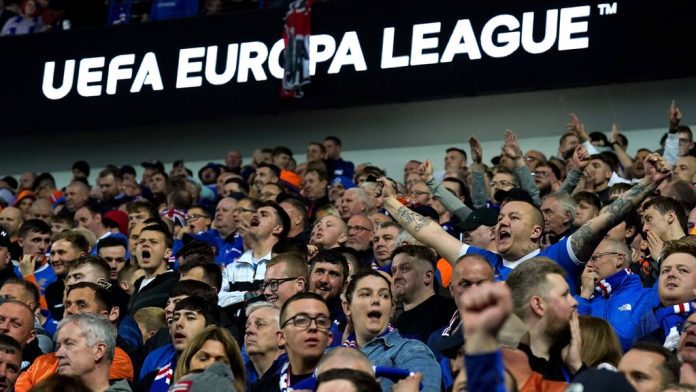 More than half a year after the Europa League semi-final second leg in Scotland, a Glasgow Rangers fan has to pay for his misconduct. As noted in the picture, the Hitler salute was shown several times in front of RB Leipzig fans in the trailer (29). In addition, he verbally clashed with visiting supporters in the Scots’ 3–1 victory.

Glasgow Sheriff Court has now sentenced the 29-year-old to a £790 (€912) fine. And he will not be allowed to take part in British football games for the next six months. The fan was unrepentant in court – he denied guilt.

But several witnesses, including a police officer, had testified against him. Law enforcement officer Mark Boyd (31) said, “The hand was open and the hand was outstretched.” He found the sight repulsive. Rangers supporters clearly wanted to provoke the German fans, they did not express their attitude by gesture.

According to the “Scottish Daily Express”, he himself claimed that at the RB Leipzig game he showed the “red hand of Ulster and the Crown”, a pro-Northern Irish salute, not the Hitler salute. The court did not believe his words. If he does it again, he faces a jail sentence.