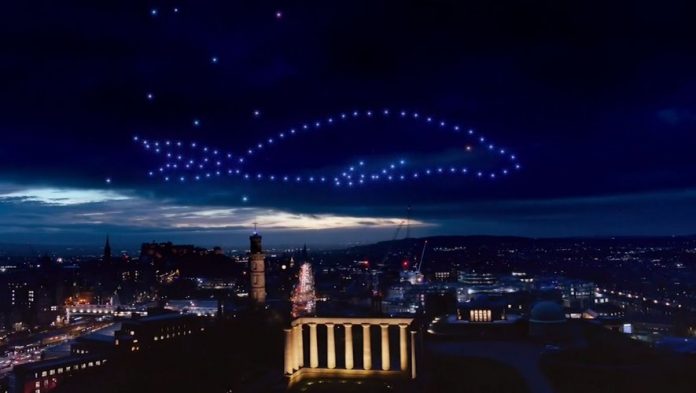 Required
This is a unique spectacle that took place in the skies of Edinburgh, Scotland on this Wednesday, 30 December. No less than 150 drones lend themselves to a spectacular aerial ballet in the Scottish capital during the New Year celebrations.

There is a lightness in the show. A few colorful dots that shine in a particularly overcast Scottish sky. At the end of 2020, the famous Hogmanay festival of EdinburghOne of the largest New Year’s Eve celebrations in the world, presented the people of the Scottish capital with a somewhat remarkable and unique high-tech scene. No fewer than 150 drone pilots participated in the game and lit up the sky above Edinburgh to celebrate the New Year.

Machines take the form of very different animals: a deer that begins to gallop over the Scottish mountains, a pigeon that flies above the capital’s palace, for a work that is ultimately very poetic. The illustrations were created by Gary Wilson, who drew inspiration from the words of writer Jackie Ka. The title of the show is “Fair Well” and it is primarily inspired by “what we can or cannot do in 2020”, specifying the site of the event.

On site, despite the health crisis, the incident should continue until Friday. A spectacular fireworks display is planned in the Scottish capital.