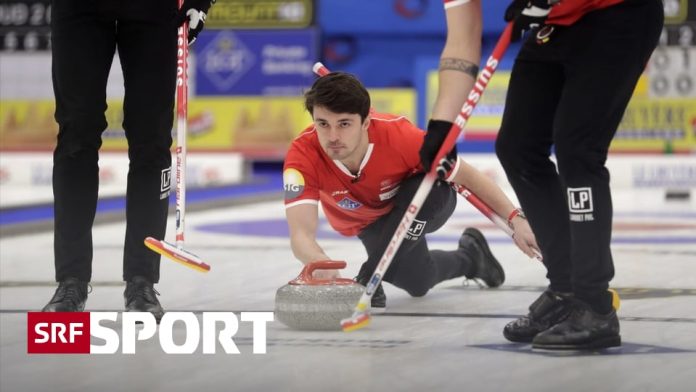 Four hours after the Swiss women, the Swiss men were also in the final for the gold medal at the European Curling Championships in Ostersund. The quartet around skip Yannick Schwaler wanted to do better than Silvana Tirinzoni & Co., who did their bit lost against Denmark in the extra end,

After the 9th end, in which the Swiss were able to steal a stone to make it 4:3, there were also good signs that the Geneva CC quartet would at least reach the extra end. But Bruce Maut should veto it. The Scottish skip – European champion 2018 and 2021, vice world champion 2021 and vice Olympic champion 2022 – played two superb stones in the 10th end to secure a narrow victory for his side.

With his final attempt, Mouat pulled off a spectacular double takeout on two lying stones. And after Benoît Schwarz placed the last stone hidden in the center for Switzerland, the 28-year-old Scotsman fired it home again two stones away. These last two efforts alone made Mouat a worthy winner.

Schwaler (Skip), Schwarz (Fourth), Sven Michel (2nd) and Pablo Lacht (Lead) made the tactical final perfectly balanced. At half time it was 2:2, after 8 ends it was 3:3. Finally, the Swiss also ran out of time. When Black released his last checker, there were 11 seconds left on the clock.

In the end, very little was missing from the first Swiss EM Gold for men since 2013. Double silver for women and men is a déjà vu for Switzerland: 13 years ago both teams also reached the final. Then, in 2009 in Aberdeen, Scotland, both finals were lost.