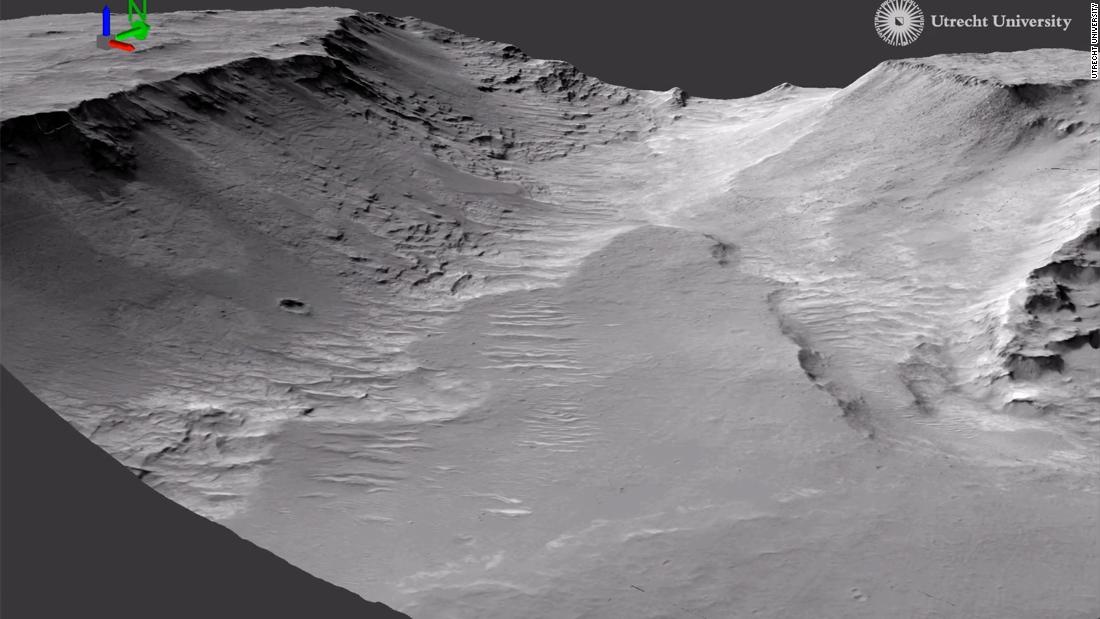 New images and highly detailed data of the reefs exposed on Mars reveal the first evidence of rivers that existed on the Martian surface for over 100,000 years 3.7 billion years ago, according to a study published Tuesday in the journal Nature Communications.
An international team of scientists has used images and topography captured by NASA’s Mars Reconnaissance Orbiter HiRISE camera to study an edge of the Hellas basin in the southern hemisphere of Mars. The Hellas impact crater has long been of interest to researchers because it is one of the largest in our solar system, which extends 9 miles from the crater to the edge.

Here, in the rock you can see ancient evidence of a large lake, rivers, deltas and canals. And the rocks reveal that Mars must have had a sustained and significant presence of water in its past.

The researchers narrowed their focus to a rocky cliff about 656 feet high, twice that of Dover’s famous white cliffs along the English coast. There, the rocks are 3.7 billion years old. Composed of sediments accumulated over time, they are like the rocks found on Earth that were formed by rivers.

These exposed rock faces on Mars reveal “rivers that have continuously moved their canals, creating sandbanks, similar to the Rhine or rivers you can find in Northern Italy,” the researchers said in their study.

“It’s not like reading a newspaper, but the very high resolution images allowed us to” read “the rocks as if you were very close to the cliff,” said Francesco Salese, author of the study, geologist at the University of Utrecht in the Netherlands and senior scientist at the International Research School of Planetary Sciences in Italy, in a note.

See also  Brexit, a love letter from Scotland to the European Union

“Unfortunately we don’t have the ability to climb, to look at the details on a finer scale, but the striking similarities with sedimentary rocks on Earth leave little to the imagination.”

Sedimentary rocks record layers of history and researchers have been able to determine that the canals of these ancient rivers were about nine or 10 feet or several meters deep.

Analyzing these layers on Mars can shed light on its history, just as geologists used layers of sediment on Earth to understand how our planet evolved over time and imagine how it was millions and billions of years ago.

“We now have the technology to extend this methodology to another terrestrial planet, Mars, which houses an ancient record of sedimentary rocks that stretches even further back in time than ours,” said William McMahon, co-author of the study and geologist. at the University of Utrecht, in a statement.

Obviously the rocks that they have been able to study from orbital data contain only a fraction of the time when water and sediment were moved to the region, the researchers said. Erosion is a powerful force and can erase layers of history in rocks. But other rocks that act as weather markers could be discovered or buried, they said.

But they say they are lucky to have been able to study this particular rock face, which was inclined at a right angle so that the orbiter could capture it just like that. This angle allowed researchers to see what they refer to as stacking patterns in rocky deposits and in the forms of the soil created by ancient rivers. They could find out where the sediment has changed and speculate what created the different layers.

See also  COVID-19: These Are Indicators You Will Most Probably Get Initial, New Investigation Reveals

Based on the evidence they found in the orbital data, the researchers believe that the planet’s water was driven by precipitation, like the rain we experience on Earth, and had a sustained presence 3.7 billion years ago.

Previous studies on ancient water on Mars also suggest that it has been prolonged, and this new research adds to that field, suggesting the fact that a significant amount of water was part of the Martian landscape billions of years ago.

“Such rivers that flow perennially would require an environment capable of maintaining large volumes of water for long periods of time, and almost certainly needed a hydrological cycle driven by precipitation,” said Salese. “[This is] more in line with slower climate changes and less in line with catastrophic hydrological events. This type of evidence of a long-lasting aqueous landscape is crucial in our search for ancient life on the planet. “